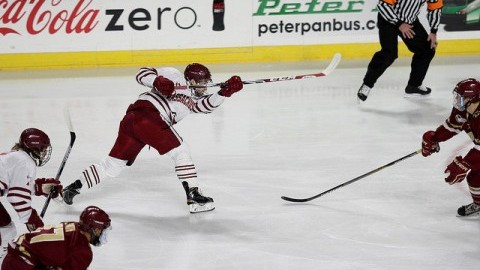 Prior to the 2014-2015 season, Massachusetts hockey coach John Micheletto said Frank Vatrano “loves scoring goals more than anybody else.”

Although Vatrano started the year with four consecutive pointless games, the redshirt sophomore is now justifying his coach’s claim, recording a point in seven of UMass’ last nine games. He’s tied for a team-best five goals.

A redshirt sophomore, Vatrano sat all of last regular season after transferring from Boston College and being ruled ineligible for the Minutemen’s first 34 games. Vatrano made his debut on March 7 in UMass’ 2-1 loss to Vermont in the opening round of the Hockey East tournament.

Entering this season with high expectations, Vatrano said he’s feeling comfortable after a long wait to play at the collegiate level.

“I think I kind of found my place out there and I’m more comfortable, getting more games under my belt,” Vatrano said. “Overall it’s just my teammates helping me get used to the pace and all that.”

Micheletto said a major difference in the forward’s recent play is in his instincts, such as knowing when to get rid of the puck or where to jump into open spots to get pucks.

“As good as (Vatrano) was in the early goings in terms of effort and execution, it was just something to be said about the timing of the game,” Micheletto said. “I think those split-second or half-second differences is what you’re now starting to see get incorporated into (Vatrano’s) game on a chip-by-chip basis.”

Vatrano opened the season on a line with senior captain Troy Power and freshman Dennis Kravchenko. Although the trio combined for five points in the Minutemen’s preseason exhibition matchup against Dalhousie, they struggled to find the score sheet early on in the regular season.

“They were having positive influences on the game, it’s just that the goals weren’t coming at that point,” Micheletto said.

Five games into the year and heading into a weekend series against Maine on Oct. 31, Micheletto made a lineup change, flanking Vatrano with sophomores Ray Pigozzi and Steven Iacobellis.

The move immediately paid dividends as Vatrano began a four-game scoring streak, tallying three goals and three assists during the span. In total, Vatrano, Pigozzi and Iacobellis have combined to produce 32 points this season.

According to Vatrano, the three sophomores bring contrasting skills that have proven to complement each other well.

“I think we all play different styles,” Vatrano said. “(Pigozzi’s) a really good playmaker and (Iacobellis) really works well down low and creates offense that way. And I’m more of a shooter that also makes plays off my shots. We all play with a different style that leads to a lot of success.”

While Pigozzi and Iacobellis played the majority of their freshmen seasons on the same line, Iacobellis said that the addition of Vatrano early this season did not lead to any extensive adjustment period. Iacobellis said Vatrano often practiced alongside the two linemates last season while he was sitting out, which allowed for an easy transition.

Vatrano is most recently coming off a two-game weekend set against Quinnipiac in which he scored a goal in each matchup. In Friday’s game against the Bobcats, Pigozzi and Vatrano led a 2-on-1 break that resulted in a Vatrano goal. On Tuesday, it was named the No. 2 play of the week by the NCAA.

“(Pigozzi) and (Iacobellis) were playing together the majority of last season so they have some chemistry together,” Vatrano said. “But it wasn’t too hard to find the chemistry with those two.”

Now preparing for a two-game home set against Notre Dame this weekend, Vatrano said that the collective focus will be on defense, which he believes will lead to further offensive opportunities for himself and UMass.

“We always think about creating offense out of our (defensive zone). That’s what our whole team has been stressing lately,” Vatrano said. “Paying attention to those little things, I think our team will have way more success down the road.”

Anthony Chiusano can be reached at [email protected] and can be followed at a_chiusano24.