Letter: A solution to the Ferguson crisis 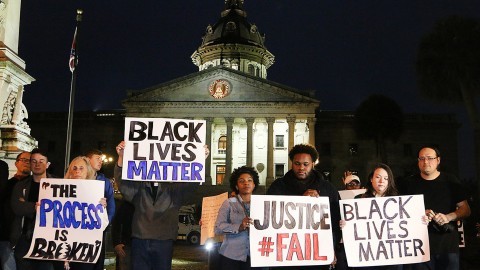 A rally at the South Carolina State House, in Columbia, S.C., in the wake of the grand jury decision not to indict officer Darren Wilson in the shooting death of Ferguson, Mo., teen Michael Brown, on Tuesday, Nov. 25, 2014. (Kim Kim Foster/The State/MCT)

As predicted, the grand jury in Ferguson, Missouri decided not to indict police officer Darren Wilson in the fatal shooting of Michael Brown. And as expected, chaos erupted and violence swept through the streets. The nation is watching fearfully, wondering how this will unfold. Michael Brown’s family is devastated and wants Wilson to be held accountable.

While all of this is understandable, this moment offers an opportunity to find a better way, one that will honor the memory of Michael Brown and bring peace to Ferguson.

South African novelist Alan Paton writes that if a crime has been done to you, there is only one way to recover, and that is to forgive. It is my experience working in public schools that forgiveness is the only thing that can break the cycle of violence. If this is true between children, how much more applicable is it for adults?

Darren Wilson should reach out to the family of Michael Brown and ask for forgiveness. The same needs to happen between the police department and the black community, to start rebuilding the trust that has been broken. If Officer Wilson would reach out and the family would accept his expression of remorse, the encounter would become a model for the entire world, wherever there are racial and ethnic tensions. It would show that violence need not always be countered with violence, but can be overcome with love, compassion and forgiveness.