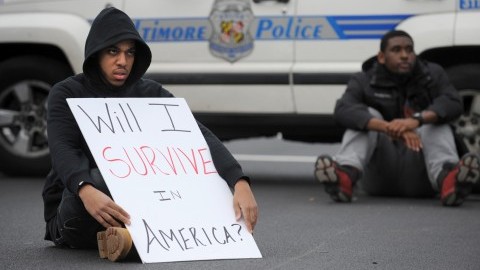 If the decision by a grand jury to not indict Officer Darren Wilson on state criminal charges in the killing of Michael Brown didn’t move you to anger and tears, you may lack basic human empathy.

This is a complicated and layered situation. There are many important angles to it, many serious questions left unanswered and many people hurting on all ends.

I am not interested in crafting a divisive, black and white narrative that perpetuates the “us vs. them” mentality that is destroying this country.

Look around you. These aren’t riots – this is a rebellion. This is violent resistance to continuous oppression and abuse of authority. This is the pent up reaction to an existence where black life is valued, respected and protected less than white life. Rather, black life in this country is targeted. Time and time again, from “accidental” killings to more blatant police brutality, it is shown that in this country, being black is crime enough.

This is why I’m not interested in the details. Yes, they’re important, and I have no doubt they will continue to be the focus of this issue. They’re more tangible, easier to decipher and more accessible. It’s easy for us to read reports on the actual incident and pick a side. What we struggle with are the real issues, like the fact that racism is not a thing of the past, but alive and well.

Though not as blatant as a “whites-only” water fountain, racism plagues this country with a far more dangerous subtlety than it has in the past. We live in a country where our most relied upon and trusted social structures – politics, education, the economy and the criminal justice system –have a powerful and striking undercurrent of racism and oppression. These are deeply embedded systematic issues, not singular disputes, and if we keep treating them as such we will never be able to incite large-scale change.

We shy away from the larger and more important issues because they’re heavy, murky, complex and most of all, because to address them would be to indict ourselves. We are so quick to blame, yet so unwilling to accept blame and address our accountability.

As it was happening, I could feel that the Ferguson decision was going to be a moment that reverberated in my heart for the rest of my life. I hope that it does the same for you. I take out of this tragedy the reaffirmed will to spend my life fighting for change.

In the words of the great black poet Langston Hughes, “I am so tired of waiting, aren’t you? For the world to become good, and beautiful, and kind.”