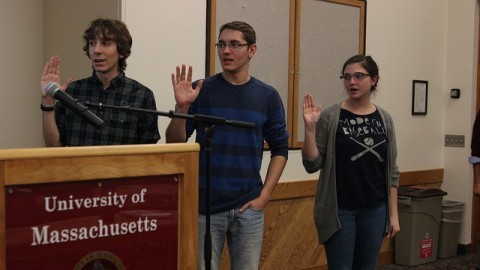 The final Student Government Association meeting of the semester took place Monday night, during which senators and officers discussed accomplishments and looked at goals for the spring.

“This semester has taught me what I need to do to become a better leader,” President Vinayak Rao said.

Speaker of the Senate Sïonan Barrett mentioned the Women’s Leadership Conference will be held Feb. 28, while the general leadership conference will take place shortly after.

Because of Thanksgiving break, the different committees did not meet last week.  However, there were still several motions on the floor.

The first motion involved appointing Meghan Tunno, sponsored by Barrett, to the Diversity and Student Engagement Committee. The motion passed.

There was then a series of motions in which three people were appointed to become elections commissioners. Erik Herlitz, a biochemistry and molecular biology major, was one of the students appointed.

Although Herlitz hasn’t been involved in politics before, he said, “I wanted to take part in elections this year.”

“A lot of my friends are engineers,” he added. “We’re not really involved in politics, but since I would be involved in it, I could spread the word.” Emy Hardy, a sophomore history and music major, was another person appointed to the position. Hardy said she believes she is able to reach certain parts of campus to urge students to vote in the next election.

Paul Flamburis, an English major, was the third person appointed as a commissioner. He said he believes it is important for students to take the opportunity to vote, saying, “We need to actively inform people (of the elections).”

Divya Kirti was then appointed as the chancellor of elections. She is the only member of the Elections Commission who was present during last year’s heated elections, and is up-to-date with any changes made to the elections process.

Kirti presented her range of leadership experience, including her role as a resident advisor and her work for the Juniper Institute.

“I believe strongly in the integrity of student voices,” Kirti said. “We are responsible for all the voices on campus, not just the ones who vote.”

The Haitian American Student Association requested funding for its service trip to Haiti, which will take place in May 2015.

Goals outlined during the group’s presentation included distributing school supplies and items that have been collected during the school year, assisting with the University of Massachusetts’ efforts to receive aid and continuing contact with University students abroad.

The organization managed to raise money through fundraising and contributions, but asked for $2,600 for transportation. In total, 12 students and two professors would be attending this trip. The motion passed.

Some motions were tabled however, including one that urged UMass administration to consider building sidewalks in areas that currently lack them.