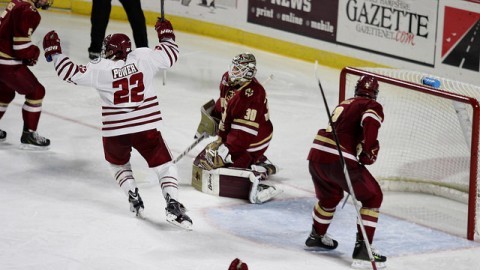 It’s been a tough stretch of games for the Massachusetts hockey team in the daunting task that is the regular season in the Hockey East.

This weekend, the gauntlet continues, when Notre Dame visits Amherst for a two-game series with the Minutemen at Mullins Center.

The Irish (6-8-2, 2-2-2 Hockey East) enter the weekend on a serious skid. The last time Notre Dame won was on Nov. 14, a 3-2 overtime win against Merrimack. Since the thriller against the Warriors, the Irish are 1-6-2 in their last nine games.

The Minutemen (4-9, 1-7 HE) are dealing with similar issues. They’re just 2-7 in their last nine games, including an 0-6 mark in conference play during that stretch. UMass has already played eight of their 21 Hockey East games, and the remaining conference points available only grow more valuable with each upcoming game.

“League points are as important on Oct. 10 when we played Boston University at home as they are here in the first week of December,” said UMass coach John Micheletto.” You can’t get them back, and it’s hard to make them up if you don’t take advantage of them when they come.”

With just one win in Hockey East, the Minutemen are tied for last with New Hampshire. Notre Dame, with two wins and two ties, is tied for sixth with Boston College.

UMass enters the game led offensively by sophomore forward Frank Vatrano. After struggling to start the season, Vatrano has recorded nine points in as many games, and his five goals are tied for the team lead.

“You have to have your best game every night,” Vatrano said. “You can’t take any nights off.”

The last meeting between these two teams was last season in South Bend, Indiana. The weekend series resulted in a split, each team winning one game apiece. Vatrano’s current linemates – sophomores Ray Pigozzi and Steven Iacobellis – combined for six points over the weekend series last season.

Pigozzi and Iacobellis have been some of the best producers for the Minutemen offensively, but overall the team has struggled to put the puck in the back of the net all season long. In their last four games, UMass has only scored six goals, and were just 1-7 on the power play Saturday night against Quinnipiac.

The power play has been a reoccurring issue for the Minutemen this season. After converting at a rate of .220 last season, their percentage has dropped even lower to a measly .135 this season. Micheletto said that the unit needs improvement if UMass hopes to start finding more success offensively.

“The power play needs to be more effective than it was (against Quinnipiac),” Micheletto said. “If we can get that going … it can put other teams back on their heels more than they were Saturday night.”

This weekend, the Minutemen should have good chances to get their power play going. The Irish rank eighth in the conference in penalty killing percentage at .825, and they’ve had to kill 63 penalties this season, second most in the conference.

Vatrano will need to become a bigger part of their success on the power play as he leads the team in with 15 on the man advantage, but so far has just a single goal and assist this season for the unit.

The power play needs to be a positive factor this weekend, when four crucial points are on the line against Notre Dame.

“They’re really big points,” Vatrano said. “These two games are big for us. They can lead us to a stronger second half of season.”