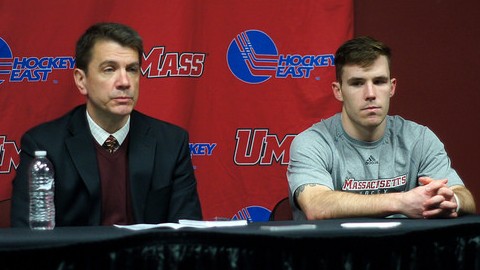 Both the Massachusetts hockey team and Notre Dame headed into this weekend’s two-game set at the Mullins Center reeling in the midst of their respective Hockey East schedules.

But while the Fighting Irish left Amherst on the upswing with two consecutive victories, UMass remains in last place within the conference after its 4-0 loss Saturday to cap a winless weekend.

With a mixture of recent struggles, a stifling Notre Dame defense that dominated puck possession and aggressive play by both teams, frustration was evident, leading to an accumulation of penalties for the Minutemen

“We put ourselves in a bad spot with some of (the penalties),” Minutemen coach John Micheletto said. “We took some frustration calls and somehow they just seemed to keep multiplying.”

The three-goal deficit came right before a series of three separate scuffles that had to be dispersed by the referees.

The first scrum occurred after UMass goaltender Steve Mastalerz cleanly caught a puck to stop play and Notre Dame’s Anders Bjork hit the goalie with his stick on a late rush toward the net. Minutemen players quickly took exception to the play, and after a great deal of pushing and shoving, three penalties were handed out, providing UMass with a 4-on-3 opportunity.

Five minutes later, Minutemen defenseman Maddison Smiley was called for boarding, prompting another scrum. UMass’ Anthony Petrella and the Fighting Irish’s Vince Hinostroza were each given 10-minute major penalties as part of the four total calls on the play.

“I think both teams were a little chippy (Saturday),” Minutemen senior captain Troy Power said. “If there was fighting in college hockey, there might have been a couple tilts tonight, but that’s just because both teams are there to compete and when points are on the line, we want those points.”

The last instance happened in the second period’s final minute after UMass defenseman Oleg Yevenko was sent to the penalty box for hitting after the whistle in retaliation to a rushing Notre Dame player that crashed into Mastalerz.

Following the game, Power said that while defending teammates is important, the Minutemen could have avoided penalties that were committed out of pure frustration.

“At times when we’re sticking up for our teammates, that’s an acceptable situation,” Power said. “But at times we got into scuffles that we didn’t need to get into and in turn took penalties on.”

“Overall it was just the intensity of the game. We were trying to get back in it and get momentum and at times, yeah, we were a little frustrated.”

In total, the second period saw seven penalties from UMass and six from the Fighting Irish. But while the Minutemen continued to find a home in the box in the final period of play –committing six more penalties – Notre Dame only went to the box twice and converted on another goal to extend its lead.

“It settled down,” Jackson said. “We played with more discipline at the end, which was important.”

As a result of the high amount of penalties, UMass struggled to find its groove offensively and was outshot 33-14. The loss marked the first time the Minutemen were shut out this season.

“Today we just needed to focus on the little things, not the big things,” Micheletto said. “Puck advancement, gaining territory and relieving pressure after you gain possession in the defensive zone coverage. That didn’t happen.”

Saturday’s defeat also marked UMass’ seventh straight loss in Hockey East play. Despite the recent struggles, however, Power said the Minutemen must remain confident entering an off-week before their next game against Northeastern on Tuesday, Nov. 16.

“We’re all a little frustrated but at the same time, the only people who are going to get us out of this little rut that we’re in is ourselves,” Power said. “Hanging our heads or showing up Monday not being ready to go is not going to help our cause.”