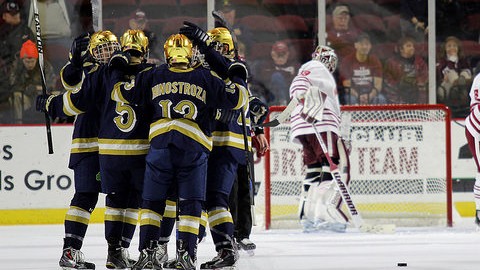 In Friday night’s 7-5 loss against Notre Dame at the Mullins center, the defense fell asleep at the wheel for the Massachusetts hockey team.

Saturday, it was a lifeless offense that did the Minutemen in, as they were shut out by the Irish, who cruised to a 4-0 win. In the loss, UMass managed just 14 shots on goal, a season low.

“We’re all a little frustrated, but at the same time, the only people who are going to get us out of this little rut we’re in is ourselves,” UMass captain Troy Power said after the game.

Just one day removed from a five-goal performance, the Minutemen (4-11, 1-9 Hockey East) never established their presence in the offensive zone, and never had a memorable scoring chance throughout the night. They spent large chunks of the game hemmed into their own zone, in part due to a strong Notre Dame forecheck, but also thanks to a lack of quick, tape-to-tape breakout passes.

“We didn’t exit our own zone or enter the offensive zone cleanly enough,” UMass coach John Micheletto said. “It’s about getting out of the zone when you have opportunities.”

The Irish did most of their offensive damage early in the second period.

After a scoreless first, Notre Dame came out firing to start the second frame. Robbie Russo scored at two minutes, eight seconds of the period (his first of two goals on the night) and the Irish picked up momentum from there. Just over five minutes later, after a long stretch of offensive zone possession, Austin Wuthrich scored to make it 2-0. Thirty-three seconds later, Mario Lucia scored his team-leading 11th goal of the season to increase the lead even further.

The Irish dominated puck possession throughout the game, finishing with a 33-14 advantage in shots on goal. For Notre Dame coach Jeff Jackson, the possession was the result of a combination of factors.

“We keep working on certain aspects of our game, whether it’s coming out of our zone or through the neutral zone, and then the cycle… This weekend we were much more consistent possessing the puck,” he said.

Not helping the UMass cause was the amount of time it spent shorthanded. The Minutemen took a whopping 14 minor penalties, and while they did a fine job on the penalty kill (Notre Dame was 1-of-9 on the power play), the constant defending killed any momentum UMass might have built, and kept it out of the offensive zone by default.

“We put ourselves in a bad spot with some of them, took some frustration calls, and somehow they just seemed to keep multiplying,” Micheletto said.

Midway through the game, that frustration started to show. After goaltender Steve Mastalerz was clipped after the whistle, Oleg Yevenko and Keith Burchett took exception to the contact, and the ensuing confrontation escalated into a full five-on-five scrum behind the net.

Minutes later, another scrum erupted, this time after freshman defenseman Maddison Smiley took a boarding penalty. Several Irish rushed in, and the result was a college version of a full line brawl.

“If there was fighting in college hockey, there might have been a couple tilts tonight,” Power said.

Despite allowing four goals, it was a solid return to the lineup for Mastalerz. In just his fourth start of the season (and first since a 35-save loss at Maine on Nov. 1) Mastalerz made 29 saves on a night when Notre Dame had extensive opportunities in the offensive zone. He looked confident in his return to action, handling pucks well, denying rebound chances and making a few saves that probably should have been goals for the Irish.

“He was not the reason we lost tonight, that’s for sure. He was certainly there when we were not for him in those moments,” Micheletto said.

The Minutemen will have a full 10 days off before their next game, as they don’t return to action until Dec. 16 when they take on Northeastern at Mullins Center.

Ross Gienieczko can be reached at [email protected] and followed on twitter @RossGien.