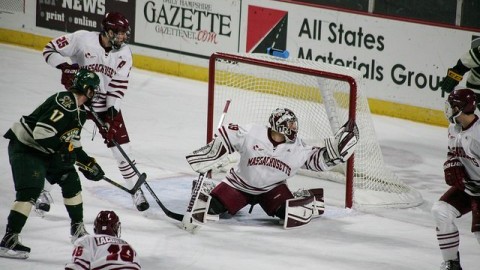 I’ve long been a proponent of the old adage that defense wins championships.

And while the Massachusetts hockey team isn’t in position to be discussed as a title contender this season, UMass’ hopes of finishing 2014-2015 on a positive note and advancing in the Hockey East tournament for the first time in six years rests on its defense.

The Minutemen’s offense has had its share of problems and inconsistencies this season. However, with a variety of players emerging as scoring threats this season – ranging from expected contributors such as Frank Vatrano, Steven Iacobellis and Dennis Kravchenko to more experienced breakout goal manufacturers like Shane Walsh – UMass’ offense has shown the potential to stay competitive and put up points.

But more often than not, late defensive breakdowns, avoidable penalties leading to penalty-killing situations and careless turnovers have led to inescapable deficits and extended losing streaks.

The Minutemen have allowed a conference-high 98 goals, 22 more than the next closest team. Of these conceded goals, 45 have come in the final period of play – also a Hockey East high.

These third-period blunders have proved costly this season, turning competitive games into easy wins for the opposition, starting in UMass’ season opener against Boston University.

The Minutemen appeared to find momentum heading into the final period against the Terriers, tallying a goal with 47 seconds left in the second to head into the locker room with a manageable 2-1 deficit.

But BU hastily reestablished control after the break, scoring six unanswered goals and  leaving UMass a sour taste to begin the season and the first of many lopsided defeats.

A conference-high 14.6 penalty minutes per game has often attributed to these defensive struggles, especially late in games.

With accumulations of losses and in-game struggles, frustration penalties can become a problem, as senior captain Troy Power admitted following a 4-0 loss to Notre Dame on Dec. 6 in which the Minutemen spent an astounding 48 minutes in the penalty box.

However, even after an impressive comeback win the previous night, penalties still remained an issue on Jan. 10 against Maine. UMass committed nine penalties, including two 10-minute misconducts, in an uninspiring 3-0 defeat.

It’s no secret that penalties kill a team’s offensive flow. In addition to putting pressure on a defensive backline that already shows inconsistencies at full strength, it prevents its offense from going into complete attack mode.

This hindrance becomes apparent when examining these two particular games against the Fighting Irish and Black Bears in which the Minutemen tallied their highest penalty minutes, resulting in the team’s only two shutout losses this season. If UMass wants to reach its full potential on offense – and give its defense some much needed aid – then it must limit these transgressions.

Fortunately for UMass, its defensive performances have improved since resuming play following winter break. With a large chunk of the gauntlet of a Hockey East schedule behind them, the Minutemen have benefitted from much more consistency.

This progress starts with the play in net by Henry Dill. In the weekend series against Maine Jan. 9-10, the freshman goaltender looked to be in his best form since his first two starts of his UMass career in October after unofficially seizing the starting job.

Dill rebounded from December struggles to post 35 saves in a 3-2 victory over Maine.  The next day, he responded with 34 saves in a 3-0 defeat in which he only allowed one goal in 5-on-5 play – once again proving the importance of penalty reduction.

Dill’s emergence at the beginning of the season provided the Minutemen with a momentary boost and assurance in net. If he can continue to expand on his success to start the new calendar year, the freshman can offer a similar jolt come postseason play.

But UMass’ defensive success truly hinges on the efforts in front of Dill or whoever is in net for the Minutemen.

The UMass blue line is at its best when it blocks shots and creates turnovers to lead to transitional opportunities for its array of speedy forwards.

While this type of defensive performance was evident in wins over inferior teams such as American International College and Air Force, the Minutemen have failed to maintain this high-pressure, aggressive approach for a full 60 minutes against the Hockey East’s elite.

If UMass truly wants to compete in the postseason, now is the time to translate its in-season adjustments and defensive aggressiveness into success against some of college hockey’s best programs.

With eight out of its last 10 games remaining against nationally ranked opponents, UMass now has this chance to make a statement and seek redemption for its early season struggles in Hockey East play.

Whether the Minutemen continue to sink or pull off some surprise victories in this challenging stretch ahead largely depends on defensive persistence and execution.