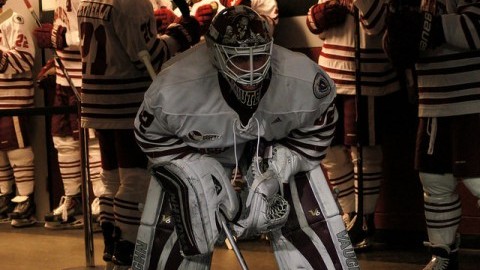 Entering the 2014-2015 campaign for the Massachusetts hockey team, most people assumed senior Steve Mastalerz would get the bulk of the minutes in goal. After all, Mastalerz had started 31 games for UMass the year before, and in his career had notched 16 wins entering the season.

Instead, true freshman Henry Dill was thrown right into the fire for coach John Micheletto’s Minutemen, and has grown into the starting role over the course of the season.

“I wasn’t really expecting it in the beginning of the year, but I just played as hard as I could,” Dill said after the team’s practice Tuesday afternoon at Mullins Center.

Talk to anyone within the program, and they’ll tell you he’s done just that, and has been working hard to improve as well.

“There’s always a confidence building that goes on with freshman, especially at that position, over the course of the season,” Micheletto said. “His puck tracking has gotten a lot better, as well as getting back up once he’s down and pushing back out.”

Part of that has come from his work before practice with goaltending coach Matt Voity. About an hour before practice, Dill and the other goaltenders on the team will head out to work on drills for positioning, movement and net-front battling.

Senior captain Troy Power has also seen a jump in Dills game throughout the season.

“The biggest thing is consistency,” Power said when asked about Dill’s improvement. “Growth comes from repetition and getting used to the pace of play. After break he’s come back rejuvenated and given us some really good minutes.”

Statistically, Dill hasn’t jumped off the charts this season. His save percentage sits at .876 and his goals against average is 3.82. However, Micheletto is more concerned with a more important stat – wins.

With a record of 7-8, Dill ranks third in the country among freshman goaltenders. In his seven wins, Dill has looked every bit the part of a veteran star, with a save percentage of .932 and goals against average of 2.19.

“That’s the important stat you look at for goaltenders, is whether they give you an opportunity to win on a given night,” Micheletto said. “More often than not, Henry’s been able to do that.”

Power also talked about Dill and what he brings to the table every time he steps in goal.

“He’s been great. He’s been huge for us. He’s given us a chance to win every time he’s played,” Power said.

As is expected, Dill has gone through some freshman struggles. Twice, he’s given up six goals in one game, and in a particularly bad outing against Northeastern gave up three goals while making only one save before being pulled.

However, there have been plenty of good moments to go along with the bad. Five times has Dill recorded over 30 saves, including a career high of 42 in a 3-2 win at Northeastern. He was named the Hockey East rookie of the week on October 27, and has been in net for every UMass win so far this season.

“There have been some nights that I’m sure there are goals that he’d like back, and there are other nights that I’d wished we played better in front of him,” Micheletto said. “Overall, for him to be at where he is now and have played the number of minutes that he has, I think it’s been a pretty successful transition for him.”

Lagesson, an 18-year-old defenseman from Gothenburg, Sweden, stands at 6-foot-2-inch, 198 pounds. He was selected by the Edmonton Oilers with the first pick of the fourth round in the 2014 NHL Entry Draft, at No. 91 overall. He skated for team Sweden in the 2014 IIHF World Junior Championship and recorded one assist, eight penalty minutes and a plus-1 +/- rating in seven games.

This season, he has skated with the Dubuque Fighting Saints of the USHL, where he has scored one goal, added 11 assists and is plus-10 in 25 appearances.

On his Elite Prospects page, Lagesson is described as “A strong defenseman that can put up some points, but plays more convincingly in his own zone. Likes to get involved in the rough stuff and has a pretty good physical game. Strong positionally, but could work some on his skating skills.”

“William is very strong, he’s an alpha dog out there on the ice. He is an imposing defenseman,” David said.