Getting up to speed with the UMass women’s basketball team 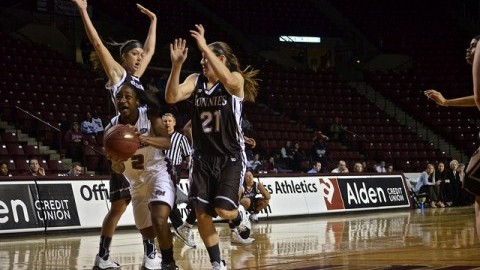 Since the fall semester ended, the Massachusetts women’s basketball team continues to build on its early success with a modest 4-4 record in the previous eight games.

With victories over Holy Cross, Boston University, La Salle and Saint Joseph’s, the Minutewomen (8-9, 2-3 Atlantic 10) have reached as many wins as the previous two years combined. UMass won just four games last year and three the year before. The last time the program was so close to a .500 record this late in the season was in the 2008-2009 campaign, where it posted a similar winter break record of 3-5.

“The rebuilding process takes a while and a lot of patience,” Minutewomen coach Sharon Dawley said. “It’s looking like the pieces are coming together. Some of these seasons go better once you catch a break, catch momentum, and grab a couple more wins. That’s what we’re trying to do.”

As the team enjoys improved success, here are some of the most important things that happened with the team over the break.

With almost a third of the 13-player roster being true freshmen this season, UMass has depended on the younger core to produce opportunities and provide depth. As key veterans Emily Mital and Amber Dillon provide better numbers coming off of the bench, freshmen guards Leah McDerment and Cierra Dillard are left with the responsibility of starting regularly for the Minutewomen, while Maggie Mulligan and Ciara Rosten produce as role players.

“[McDerment] has done a great job at the point… and Dillard at the two is a just a special basketball player,” Dawley said of the first-year players. “Maggie Mulligan has been a good sub for us. She’s a good shooter, good passer. An up and coming post player for us is Ciara Rosten. Solid defender, good rebounder, I think you’ll see more of her in the conference (matchups).

“I think all four freshmen are playing extremely well.”

Along with the improving defensive play of the freshman group, the team as a whole has trended upward defensively since winter break began. The Minutewomen feature good defenders in Rashida Timbilla and Kymber Hill, which has helped them hold opponents to 63.8 points per game, 36.2 defensive rebounds per game  and 15.7 forced turnovers per game.

“Defensively we’re better,” Dawley said. “We’re adding more zones, so I hope to be that team that can show multiple defenses and make people really pause and take time off the clock to see what they’re going to run.”

The Minutewomen have not allowed more than 75 points in a game so far this season.

The star senior forward continued to display her offensive dominance in the past month, highlighted by a career-best scoring output of 33 points in a win over Boston University. She added 14 rebounds that night and was awarded A-10 Player of the Week in the highest single-game scoring total for a UMass player since Melissa Gurile’s 38 points in 1993.

When asked about some of the things that have stood out to her about the team in recent weeks, Coach Dawley mentioned the excellence of Pierre-Louis on the offensive end and the effort she has put in to improve.

“Kim is a great scorer, obviously,” she said. “She’s pretty hard to defend, and had some games where she’s been a great rebounder as well. She made a commitment to conditioning, dropped 56 pounds, and she’s reaping the benefits of making that commitment.”