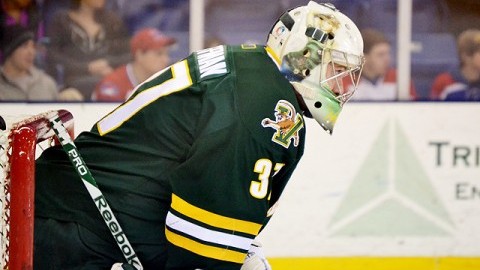 Although the game started with a scoreless first period, the Catamounts’ Mike Paliotta scored the first goal of the game just two minutes into the second period. It remained 1-0 until 2:18 left in the game, when a goal from BU’s Evan Rodrigues forced overtime.

Vermont hopes to overcome its tough loss this Saturday against Penn State at 1 p.m. at the Wells Fargo Center in Philadelphia, Pennsylvania. The Terriers bring its three-game winning streak home to face Massachusetts this Friday at 7:30 p.m. at the Agganis Arena.

Maine blows out New Hampshire in a 4-0 shutout

Even though UNH (8-14-2, 3-8-1 HEA) outshot Maine 40-21, Morris saved all shots he faced. With a brick wall in the net for the Black Bears, it allowed for the offense to score four goals throughout the game, including three in the third period.

Liam Pecararo scored the first goal for Maine (10-15-1, 5-7 HE) 10:17 into the second period. Cam Brown then scored 4:23 into the third period and Nolan Vesey scored just 21 seconds later. A Steven Swavely goal, the final of the game, resulted in the Wildcats their pulling starting goaltender Adam Clark.

Brown and Vesey both added an assist each and found themselves joining Morris as the three stars of the game.

UNH returns to action with a two-game series against Notre Dame Jan. 30 to 31. Maine’s next action will be against Connecticut on Jan. 30 and Feb. 1.

Boston College’s Ryan Fitzgerald notched a hat trick and helped the Eagles hold off UConn in a 3-2 victory Saturday.

Fitzgerald scored two power play goals, one being the game-winner, and became the first BC player to score three goals this season

Although Fitzgerald was the only Eagle to put the puck in the net, BC outshot the Huskies 37-21. Eagles goalie Thatcher Demko recorded 19 saves in the victory while losing UConn goalie Rob Nichols finished with 34.

BC ended the game 2-for-4 on its power play opportunities while Connecticut went 1-for-4.

The game was tied at two goals apiece in the third period until Fitzgerald scored with 8:40 seconds left in regulation. Ryan Segalla and Joona Kunnas scored the two goals for the Huskies.

Jesse Korzen can be reached at [email protected]