How to avoid, treat and prevent Computer Vision Syndrome as a college student 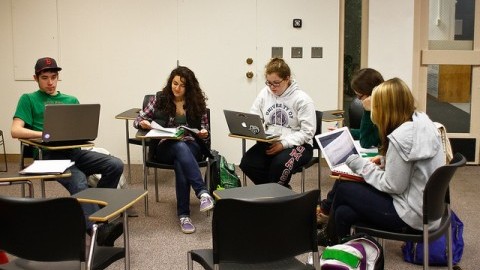 As college students, staring into computer screens and smart phones are as necessary to our daily routine as brushing our teeth or eating breakfast. However, according to the American Optometric Association, anyone who continuously stares into a screen for more than two hours a day is at risk for developing Computer Vision Syndrome. CVS does not refer to one specific eye problem, but encompasses a whole range of eyestrain and pain. The most common symptoms include eye strain, headaches, dry eyes and neck and shoulder pain.

CVS is usually caused by poor screen lighting, glares from the computer screen, an inappropriate viewing distance and unhealthy seating posture. When the eyes are continuously having to focus and align with what they are seeing, simply looking back and forth to a piece of paper when doing homework causes them to constantly refocus, putting a lot of strain on the eye muscles.

Mark Rosenfield, a professor at the State University of New York College of Optometry,  was quoted in the Washington Post and stated there are many problems with computer screens, such as the dramatic decrease in blinking when viewers stare at a screen as well as the viewing position of a computer screen being relatively level with someone’s eyes, causing them to stare straight ahead. This leads to severely dry eyes.

Diagnosing the syndrome is dependent upon patient history and susceptibility. WebMD explains that the syndrome is more likely to occur in those who already have an eye problem. Also, as people continue to get older, the lens of their eyes becomes less flexible, causing the ability to focus on near and far objects to diminish. Tests can be done by an optometrist to determine whether or not someone has CVS.

Dr. Matt Gardiner, an ophthalmologist at Massachusetts Eye and Ear Infirmary in Boston and director of ophthalmology emergency services, said he sees a lot patients seeking treatment for CVS, according to the Boston Globe.

He says, “At least every eighth patient has this complaint – it’s super common.” This holds true in research showing that 50 to 90 percent of those who work with a computer show at least some symptoms of eye trouble.

CVS and its symptoms will worsen without change of computer usage and without a consultation from a doctor. However, most of these are temporary, treatable and will go away. The American Optometric Association recommends obtaining regular eye care exams, blinking when using the computer, making sure your feet are resting flat on the ground, positioning the computer screen at about four to five inches below eye level and 20 to 28 inches away from the eyes, purchasing a screen glare filter and taking 20 second breaks every 20 minutes by staring 20 feet or so away to give the eyes a break.

There is even technology that ironically caters to improving eyesight and preventing CVS, such as the free app created by Gang Luo, an Associate Scientist at Massachusetts Eye and Ear Infirmary. The app is called SuperVision Magnifier and helps magnify images and provide extra light by using the phone’s camera. It includes an image stabilization feature so that the enlarged type or images don’t cause the eyes to shift and move around so much. Part of being tech savvy as young adults also includes being smart about the ways in which it is affecting the body, so make an appointment at University Health Services or with your primary care physician if you experience symptoms of CVS, or simply start by implementing these tips to be preventative and proactive about your eyesight as a college student.

Correction: A previous version of this article incorrectly spelled Gang Luo’s name. It has since been corrected above.