Minutewomen hit the road for pair of conference games 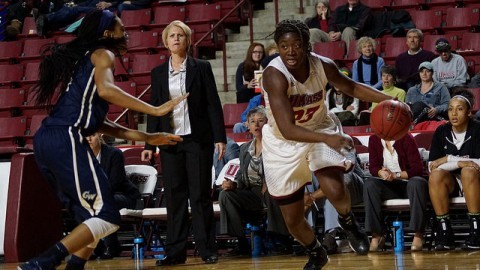 The Massachusetts women’s basketball team is undoubtedly on the upswing in terms of overall program success. The Minutewomen (8-9, 2-3 Atlantic 10) have already doubled their win total from a season ago and continue to improve on both ends of the floor.

Now comes a point in UMass’ schedule where its mettle will be tested and the rest of the conference will find out just how much progress this surprising – and confident – young team has made since last winter.

After suffering a loss on Sunday to George Washington, the top-ranked team in the A-10, the Minutewomen have yet another formidable challenge as they travel to the Bronx to take on Fordham, the defending conference champions Wednesday.

The Rams (13-5, 5-0 A-10) are currently tied with the Colonials for top seed in the conference. But despite both program’s widespread success, Fordham and GW offer two distinctly different styles of play. While the Colonials beat you with consistent interior scoring – they’re third in scoring offense and first in field goal percentage – the Rams’ aggressive defense is the core of their winning formula.

Fordham head coach Stephanie Gaitley, the third winningest coach in A-10 history, has transformed her program into a perennial conference power with her trademark defensive style that once again has the Rams at the top of the leaderboard in scoring defense, averaging just 53.4 points allowed per contest. UMass head coach Sharon Dawley and the Minutewomen will have their work cut out for them, transitioning from two opponents that are both highly successful and strikingly different, all on two days rest.

The performance of forward Kim Pierre-Louis is key to UMass’ success. Averaging 18.2 points per game, she struggled early against GW and the Minutewomen couldn’t dig themselves out of the early hole. Getting her involved early and often will drastically boost the Minutewomen’s ability to come out with a win. Pierre-Louis and guard Cierra Dillard are the only players on the team who have averaged more than 10 points per game this season, so if Fordham focuses on shutting down those two, the rest of UMass will have to step up to fill the offensive void.

Senior forward Emily Tapio is the Rams’ leading scorer this season, but she averages only 12.2 ppg, further highlighting Fordham’s reliance on its defense, since it ranks 12th in scoring offense in the A-10.

Once the Minutewomen get past the Rams on Wednesday, the road becomes – at least on paper – a bit easier. UMass heads to Virginia to face Richmond Saturday. The Spiders currently sit just above UMass in the eighth spot in the A-10.

The Spiders have been a streaky team this winter – they lost four games in a row, starting in late November, and then proceeded to bounce back with five consecutive wins. Coming off a commanding win against George Mason on Sunday, Richmond sports a 10-7 overall record and 2-2 in conference play.

Leading the team offensively is sophomore guard Janelle Hubbard at 14.7 ppg. She scored 18 points on 5-of-13 shooting against the Patriots and will be a key target for the Minutewomen defense, which has held its own against stiff competition as of late.

Statistically speaking, Richmond and UMass are strikingly similar, sporting almost the same number of blocks, assists and steals per game. In the meeting last season, despite a double-double from Pierre-Louis, the Minutewomen lost a shootout to the Spiders, 89-76. This season, the UMass defense is allowing just 63.8 points per game, so a repeat of last year’s high-scoring affair is unlikely.

If the Minutewomen can finish these two road games with at least one win, they would be in a solid position moving forward with the rest of their conference schedule. As Dawley said on Sunday, “It’s all about doing the best we can in the conference, and then attacking the conference tournament.”

UMass’ match up with Fordham starts at noon on Wednesday. After coming back to campus for a few days of practice, the Minutewomen will take on Richmond at 2 p.m. on Saturday.