Panda Bear remains confident, even in the face of ‘The Grim Reaper’ 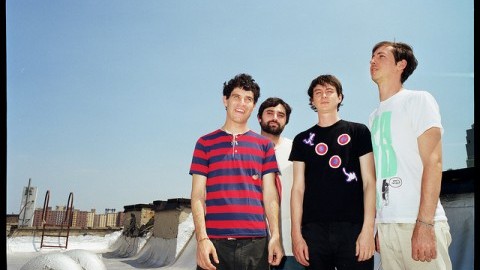 Just a look at the title of Noah Lennox’s newest album makes you aware that he has changed gears.

Gone are the sun-stroked melodies, the humid ripples of instrumentation that permeated his last effort as Panda Bear – 2011’s superb album “Tomboy.” In its place is not death, so much as a quiet, but nagging paranoia. It is a feeling that transforms Lennox’s typical musical palette – endless vocal harmonies, swirling layers of synthesizers, guitars and beats into a conveyor of uncertainty.

There is still a deep, circus-like undercurrent to “Panda Bear Meets the Grim Reaper,” as there has been on every previous Panda Bear record. It is just that this circus’ clowns are the deeply unnerving kind, rather than the ones that bring out a smile.

Though “Panda Bear Meets the Grim Reaper,” released Jan. 13, is not the first time Lennox has tackled death head-on in a Panda Bear release – 2004’s acoustic “Young Prayer” was written for his father, who died of brain cancer in 2002 – it is the first album to examine the subject through the vibrant, colorful lens of Lennox’s recent work.

The end result is a definite shift for him: an album that is less dense than “Person Pitch,” his critically lauded 2007 album, less warm and life-affirming than “Tomboy,” but a rewardingly idiosyncratic and at times deeply cathartic entry in his catalog.

Despite the darkness that constantly hovers over “Grim Reaper,” Lennox is still able to inject some of his trademark playfulness into the album’s mood. The album’s second song, “Mr Noah,” mixes an irresistible hook with a virtual caravan of synthesizers that constantly seem to be on the verge of derailing the song.

But Lennox rises above the instrumental chaos to deliver one of his better vocal performances on the playlist, letting the anxiety in his surrealist lyrics blend with the song’s carnival-like atmosphere. “Crosswords” finds Lennox in similarly stellar form. Addressing his insecurities as a father and husband – “stay there while I move/stay scared while I improve,” – Lennox searches for and finds a pocket of blissful security. Turning to himself, Lennox sings, “You got it so good,” letting his voice and the sublime melody it carries wash beautifully over the song’s fluid rhythm.

With its overpowering, ping-pong harmonies, “Boys Latin” is more in the vein of Lennox’s past work as a member of Animal Collective than anything else on “Grim Reaper.” Though Lennox finds himself saying, “Dark cloud has descended again” during the song’s chorus, he sounds completely self-assured in the face of the darkness.

Vocally, it’s his finest moment on the album, as Lennox brings a wide variety of emotions to the table and lets them do the battle for the listener.

Despite its triumphs, a few tracks on “Grim Reaper” do seem to promise more at first than they ever deliver in the end. On the seven-minute “Come to Your Senses,” Lennox asks himself repeatedly, “Are you mad?” over a hypnotic, heavy beat. Though it is initially enthralling, Lennox answers himself quickly, “Yeah I’m mad,” taking with it some of the song’s central intrigue.

“Lonely Wanderer” is centered around a gorgeous, almost Erik Satie-esque piano loop but tends to ruin its own momentum with the intrusion of an equally omnipresent, thunderous synth-bass. The ballad “Tropic of Cancer,” with its delicate harp, almost brings to mind the Beatles’ “She’s Leaving Home.” But despite having that, plus another stellar Lennox vocal performance up its sleeve, it also fails to really develop beyond its original promise.

Despite these roadblocks and the album’s deeply underwhelming final quarter, “Panda Bear Meets the Grim Reaper” rewards repeated listeners. Though Lennox seems to be more consumed with domestic anxiety than ever before, he is also more musically confident than at any point in his career.

The way Lennox channels darkness through vocal harmonies and instrumentation that are inherently sunny is incredibly smooth. On “Panda Bear Meets the Grim Reaper,” Noah Lennox is haunted by the titular figure, but he is not consumed by fear. Despite the demons that follow him on every song, Lennox sounds, if nothing else, more sure-footed in his unique genius than ever before.