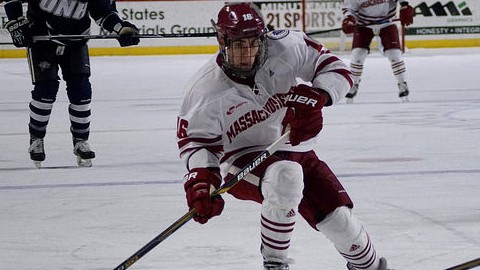 After Friday’s wild 6-4 win against New Hampshire at Mullins Center, it seemed the Massachusetts hockey team had finally exorcised its third period demons. The back and forth game saw the Minutemen blow two leads in the third period alone, but UMass rallied behind goals from Shane Walsh and Troy Power to win just its second Hockey East game all season.

Saturday night, the familiar third period demons returned for UMass, as it conceded four goals in the final frame and fell to the Wildcats 5-2 in Durham, New Hampshire.

The Minutemen (7-16, 2-11 HEA) received contributions from some unlikely sources offensively. Steven Guzzo scored his first goal of the season and freshman forward Riley McDougall scored his second goal in as many nights. Keith Burchett assisted on the McDougall goal, which made it 2-1 in the third period and represented the go-ahead marker in the game.

But UMass was doomed again by a poor performance in the third period. After McDougall gave them the lead at four minutes, 59 seconds of the third, UNH proceeded to score four times in a span of just under 11 minutes, capping off the affair with an empty netter at 17:46 of the third period.

The Wildcats (8-12-2, 2-6-1 HEA) are in the midst of a down year and gave up three goals themselves Friday night in the third period. But Saturday, UNH was quick and opportunistic, scoring four goals on 13 third period shots. Forward Grayson Downing scored twice on the night to fuel the Wildcat attack, and goaltender Daniel Tirone picked up his third win in net to improve to 3-0 on the year.

“They’re able to exploit big ice and use the whole width very well, and they did that tonight,” UMass coach John Micheletto said.

In net for the Minutemen, freshman Henry Dill held UNH to just one tally in the opening two periods, but struggled in the third, as did the rest of the team. He made 19 saves on the night, but fell to a record of 7-9 on the season. After the game, Micheletto was quick to praise his starting goaltender.

“He did a nice job tonight and gave us an opportunity to win, as he’s done most of the year in net,” Micheletto said.

The loss Saturday dropped UMass to 2-11 in conference play, and they sit tied for last in Hockey East with Maine.

“It’s the best conference in the league, and winning games is hard, we know that,” Micheletto said.

With only four points in conference play, UMass sits six points out of eighth place, the last qualifying position for the Hockey East tournament. The Minutemen have 10 games remaining, with nine of them coming in conference play. For Micheletto and his UMass squad, it’s the most important stretch of the season.

“(Conference play) is our entire focus right now. We want to be playing our best hockey come playoff time, and I feel like we continued that upwards trend tonight,” he said.

The Minutemen get right back to action with a home and home series against No. 20 Merrimack next weekend. Puck drop
Friday night in the opening game of that series is set for Friday night at 7 p.m. in North Andover.