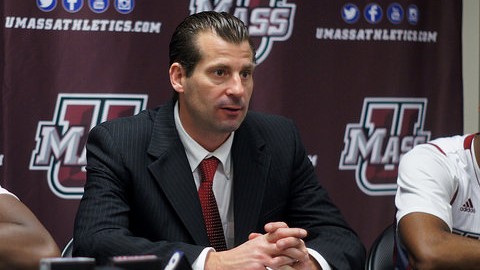 The Massachusetts men’s basketball team knows that after its NCAA tournament run a season ago, there’s a constant bulls-eye on its back.

The Minutemen also know their next opponent Rhode Island, which visits the Mullins Center Saturday, is probably taking the game even closer to heart.

“We know for them and for us, it’s like a rivalry,” UMass center Cady Lalanne said.

The Minutemen beat the Rams three different times last season by a total of 12 points.

UMass used an 18-6 run and 21 points from Chaz Williams to come back against URI on the road last season and win 73-68. More than two weeks later, they overcame another second half deficit to top the Rams 70-67 at home.

But the ultimate backbreaker came in the Atlantic 10 Conference Tournament.

URI led 37-29 at halftime and held UMass to 31 percent shooting. Yet the Minutemen rallied again behind strong play from Maxie Esho and clutch shooting from Chaz Williams to come back and defeat the Rams one final time, 65-61.

UMass coach Derek Kellogg hopes, for his sake, the Rams aren’t looking too far into the past.

“I think they have that extra chip (on their shoulder) this year in general because of where they are as a team and program,” said Kellogg, who began to smile.

“But I’m hoping they just come out like it’s a normal game and it’s regular.”

Both territorial bragging rights and conference supremacy are at stake. URI (11-4. 3-1 A-10) boasts one of its strongest teams in recent memory, led by E.C. Matthews who is averaging 17.7 points per game.

“I think it’s getting to the point where it’s a big game for both programs and teams,” Kellogg said. “The proximity, I think we both have the same goal in mind within conference and on the national level. It’s been pretty good, hard-fought basketball dating back to even the 90s when we played here.”

Lalanne put an added emphasis on trying to beat the Rams in Amherst.

“These types of wins at home are wins to help you out,” Lalanne said. “The A-10 is tough, you have to get the home wins and then go on the road and try to get those wins too. Them coming here, their record is pretty good in the A-10. So getting that win would help us out a lot.”

Kellogg said he’s ready for URI’s best effort – which isn’t much different than what most conference teams have offered so far. Since a 69-55 loss to St. Bonaventure to open conference play, Kellogg’s noticed a change in his guys.

“I think it was kind of an eye-opening experience for a few guys of how hard it is in league and how tough teams play UMass,” Kellogg said.

“You now have gone from a team that’s kind of playing to a team that people are looking at that made the NCAA Tournament last year. You’ve now established yourself. That’s a whole different ballgame … I think they realized, hopefully, that the effort now every game has to be championship level.”

URI knocked off No. 21 Nebraska in November 66-62 and recently lost to No. 17 Virginia Commonwealth 65-60. The Rams have also faced Kansas and Providence and maintain NCAA tournament aspirations similar to those that UMass entered the season with.

“I think they’re trying to make a statement and a name for themselves and I think we are too,” Kellogg said. “When that happens, I think both teams will be ready to fight and play tough.”