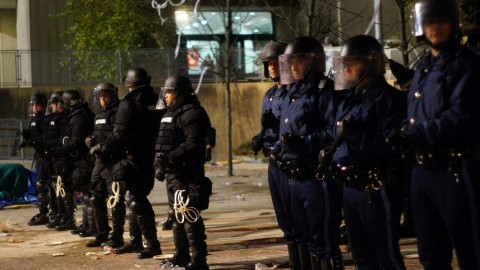 University of Massachusetts officials have taken a number of steps in the week leading up to Super Bowl Sunday to reduce the likelihood of a large, crowd-related disturbance taking place in the Southwest Residential Area after the game, including modifying the school’s guest policy and planning alternative activities for students.

For 24 hours, beginning at noon Sunday, no guests will be allowed in any residential hall on campus, and students will only have access to the dorm in which they live. UMass residents will be allowed to sign in a total of four guests from Friday to Sunday morning, but only two can be non-UMass students. Additionally, University administrators have been monitoring social media closely in preparation for the event and plan to unveil a new website Thursday with a variety of game-day resources for students.

Last October, 15 students were arrested after a World Series celebration got out of control, and 14 arrests were made after a similar disturbance took place after Super Bowl XLVI in 2012.

In anticipation of this year’s game, Gelaye said administrators have been watching all forms of social media closely, including Twitter, Fade and Yik Yak.

“Most of the UMass Super Bowl posts have the word ‘riot’ in them and ‘riot’ is a very specific word,” she said. “‘Riot’ is not the same thing as ‘celebrate.’ I think if social media was abuzz with celebrating the Patriots winning or going to the Super Bowl, I think we may be having a different conversation.”

Gelaye and UMass spokesperson Ed Blaguszewski said former Boston Police Commissioner Ed Davis’ report on large, crowd-related disturbances at UMass was a central aspect of the planning process for Sunday. The 65-page report, released in September, outlines a number of findings and recommendations for how the University can better deal with these disturbances, with a focus on community policing, police planning and response, high-risk drinking, social media, student and University accountability and public perception.

Blaguszewski noted that administrators understand that the vast majority of students are not inclined to engage in destructive activities, but an important piece of the Davis report talks about how the broader student body can easily get swept up into the crowd mentality when things start to get out of control.

“Those who go to watch it are also unknowingly swept up into the dynamic of what happens in the Southwest area because those people need onlookers to be validated,” Gelaye said. “Those people need somebody with a cell phone to take a picture and post it. That feeds that environment in ways that makes it dangerous for everybody involved.”

During last year’s World Series disturbance, a crowd of more than 3,000 gathered in the Southwest concourse and a structured celebration was trashed, prompting police to deploy smoke and pepper balls to disperse the crowd. In that particular event, Gelaye said the dynamic changed almost instantly after a small number of students got out of control.

“One of the saddest things we see, which is hard to communicate to students because there’s a new group of students coming in every year, are the consequences of coming to one of these things,” Blaguszewski said, adding that students who refuse to leave after a dispersal order has been issued will be arrested.

“These are examples of students who get swept up in these events and end up getting charged,” he said.

However, Gelaye and Blaguszewski hope alternative options for students will reduce the likelihood of that happening.

Faculty, staff and students have developed about 45 separate events for game day, according to Gelaye. These include viewing parties in the Recreation Center and Student Union, a tailgate-type event in each dining hall, late night food at Franklin and Worcester Dining Commons and viewing parties and giveaways in every residential hall.

Additionally, members of the Team Positive Presence community policing initiative will be around campus to help curb destructive behavior by talking to students and making students aware of the pre-planned activities.

A list of all activities will be available on a new website the University plans to unveil Thursday. The site will also feature resources including the town’s bylaws for off-campus students planning to throw Super Bowl parties, the student code of conduct, information about responsible fan behavior, dispersal orders, student safety and Residential Life community standards.

However, some students are not convinced the activities will be appealing to the masses.

“I think for the most part, not many people are going to utilize that,” said Patrick Jackman, a sophomore BDIC major who lives in John Adams Tower. “I think the majority are going to watch (the game) with friends in their room or maybe in the lounge within the building.”

And many are unhappy about this weekend’s modified guest policy.

“My roommate is a big football fan, but I really enjoy watching with my friends from school, so personally I’m not too happy about it because I won’t have a chance to watch the biggest game in maybe 10 years with my friends,” said Jack Nardi, a sophomore sports management major who lives in John Quincy Adams Tower. “I don’t really think it’s going to stop anyone from celebrating because we have social media and texting. …You can just text people if you want to go outside or meet up after. I don’t really see how it’s effective – it’s more of an annoyance than anything.”

Junior Jacqueline Saunders, a studio arts major who lives off campus, said she was present for the 2012 Super Bowl disturbance and last year’s World Series celebration, and was not surprised by the University’s decision to restrict its guest policy.

“Overall, I think it will probably help their situation and make it a bit of a safer celebration, and it really shouldn’t turn into a destructive celebration anyway,” she said, adding that past disturbances were fueled by alcohol.

“I’m not sure how the students are going to react to (the policy). I think they’ll still drink and whatever,” he said.

Blaguszewski said although Sunday’s guest policy is restrictive, students are not being placed in isolation and are free to leave their buildings. He added that he still expects people to gather in Southwest after the game, but a minimal crowd will be better for everyone.

“Deterring people from coming to the event really can short circuit that whole atmosphere,” he said.