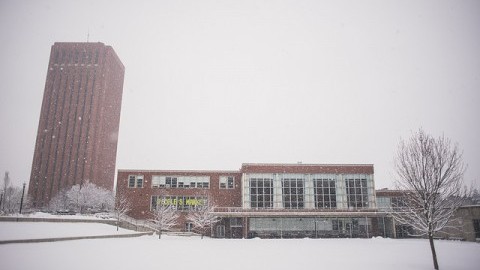 The University of Massachusetts received a research honor from the Carnegie Foundation for the Advancement of Teaching this past month, recognizing the University as a community-engaged institute.

The University received the honor due to its many student and faculty-run initiatives that benefit both the college curriculum as well as the Commonwealth of Massachusetts, according to a press release. This is UMass’ second time receiving the honor, as it was previously recognized in 2008.

According to John Reiff, director of the office of Civic Engagement and Service-Learning, benefitting the University and the state through knowledge and community engagement has been a focus of UMass since its founding, emphasizing the honor’s importance for the University.

In addition to honoring the University’s past, this award also supports community engagement as a future goal for UMass. According to Reiff, community engagement was named as one of three goals approved by the faculty senate and made part of its new strategic plan in May 2013.

“(The strategic plan says that) one goal for UMass is to become seen as a destination of choice for high-achieving high school students from across the state because what we offer in terms of education is really excellent,” he said. “The second big goal is that we be seen as an investment of choice for the Commonwealth of Massachusetts to put tax dollars into us because what we do benefits the state.”

The future goals of UMass, in addition to its past, prompted the University to re-apply for the research honor last year.

According to a press release, “the classification follows a year-long documentation and application effort by the UMass Amherst Faculty Senate Council on Public Engagement and Outreach and the office of Civic Engagement and Service-Learning, along with members of the faculty, leaders of major campus engagement initiatives, deans and associate deans.”

The application included 15 major initiatives that are connected to the University and its mission of community engagement. Among those was the Center for Women and Community, which has provided free counseling among other services for Hampshire County residents for over 30 years, and the Adoption Mentoring Partnership, which aims to pair UMass students that were adopted with similar children in the community.

While 15 initiatives were focused on in the application, over 500 community engagement projects are associated with UMass, and the selection of which projects to showcase was challenging, according to Reiff.

“(During the application process) a group of us looked at a much larger list. We wanted to showcase examples that came from different parts of the campus,” he said. “We could have substituted every one of those listed and the application still would have been really good. All the partnerships (associated with UMass) are very good.”

Reiff, who was heavily involved in the application process for the research honor, hopes the honor will inform more people about the initiatives that UMass undertakes for community engagement.

“This might catch people’s attention and see that UMass is into that,” he said. “Having said that, new initiatives will happen anyway. They are driven by our students, our faculty and our administration. The value (of the honor) is to let people outside of the community realize that this is an important part of the campus.”