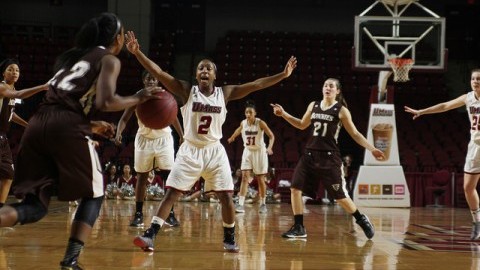 The Massachusetts women’s basketball team has been here before.

And after a promising start to the season, the Minutewomen had finally looked like they turned the page after struggling to string together wins over its past two seasons.

But history is beginning to repeat itself again.

Following their loss to La Salle on Saturday, UMass (8-14, 2-8 A10) saw its losing streak expand to six consecutive games.  Despite beating La Salle earlier in the season on Jan. 15, 71-68, the Minutewomen were on the other end of a nearly identical outcome against the Explorers, dropping Saturday’s matchup 71-69.

Despite a matchup that saw 14 lead changes, nine ties and a career day for senior Kim Pierre-Louis who dropped 33 points and contributed nine rebounds, UMass’ struggles against Atlantic 10 opponents prevailed.

But with six conference matchups until the A-10 Championships in Richmond, Virginia, there is a seemingly faint light at the end of the tunnel.

In the Minutewomen’s final six games before the championship tournament, four of those matchups – including the next three – will be at home. UMass has posted a respectable 5-4 record at Mullins Center, as opposed to its 3-8 record on the road and its 0-2 at neutral venues.

The first leg of the home stand will be against George Mason, a rematch of the first round of the Atlantic 10 championship in 2014.  UMass couldn’t  hold on to its early game lead, and saw the matchup slip away in a 85-75 overtime loss, effectively bouncing them in the first round.

The Patriots (12-11, 4-6 A10) travel to Amherst in search of their second consecutive win behind red shirt junior Taylor Brown.  Brown leads the A-10 in scoring with 22.3 points per game.  Pierre-Louis currently sits third in that category, notching 17.5 ppg of her own.

Following the game against the Patriots, UMass will host to Duquesne (15-8, 7-3 A-10).  The Dukes are currently riding a four-game losing streak but have three players averaging double-digit scoring numbers.  April Robinson leads the pack averaging 15.4 ppg, Deva’Nyar Workman averages 11.4, and sophomore Amadea Szamosi follows closely behind her with an even 11.0.

The trio is a large reason why the Dukes have the second most effective offense in the conference, averaging 74.0 per matchup.

To polish off their home stand, the Minutewomen’s final contest before a road trip to Richmond will be against a struggling Davidson team (5-19, 1-10 A10).  The Wildcats have also been on the short end of a six-game skid, but their woes against Atlantic 10 opponents have them currently sitting last in the conference, trailing only the Minutewomen in the standings

Junior Hannah Early leads Davidson in scoring, putting up 14.6 per contest, and is second on the team with 6.5 rebounds per game, trailing only Mackenzie Latt (8.6).

UMass will look to take advantage of its upcoming schedule that came at an optimal time considering the upcoming conference tournament is quickly approaching.

And what better way to do that, than at your own home court?

Wednesday afternoon is Field Trip Day at the Mullins Center with hundreds of students from the surrounding area expected to be in attendance. Tip-off against George Mason is scheduled for 11:45 am.

Frank Corona can be reached at [email protected]