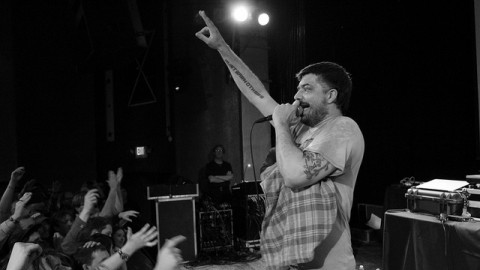 Alternative hip-hop artists Aesop Rock and Rob Sonic will play at the Pearl Street Nightclub in Northampton Wednesday night as a part of their North American tour to promote “Bestiary,” the second album that the duo and DJ Big Wiz have recorded under the group name of Hail Mary Mallon.

As frequent collaborators, Aesop Rock and Rob Sonic share an affinity for intense, rapid-fire rhyming that hinges on dense wordplay, a tendency so famous on Aesop Rock’s part that it has garnered him the reputation of possessing “the biggest vocabulary in hip-hop.”

Aesop Rock, the stage name of Ian Matthias Bavitz, has been rapping since the early 1990s, breaking through to wider attention later in the decade with two self-financed albums that would see him signed to the record label Mush. Bavitz subsequently released “Float” in 2000 as his first full-length album.

Bavitz’s time with Mush was interrupted in 2001 by a nervous breakdown. He then signed with Definitive Jux – a Manhattan-based label – later that year. This led to his first charting album in the United States, the politically-charged “Labor Days,” and began his long-term presence in American alternative hip-hop.

Rob Sonic, born Rob Smith, began his career in hip-hop in 2001 as the frontman of Sonic Sum, when its first album, “The Sanity Annex,” won the group strong critical acclaim.

The positive reception of the album soon led to Smith collaborating with better-known peers in the genre more frequently. Sonic Sum released one more album in 2004 before Rob Sonic debuted as a solo artist the same year on the album, “Telicatessen.” Two more albums followed, the latest being “Alice in Thunderdome,” released last August on Creamskl Records.

Smith’s collaboration with Bavitz, who is largely based in New York City as an artist like Smith himself, extends back to the mid-2000s, including appearances on several songs for Bavitz’s fifth studio album, “None Shall Pass,” in 2007.

The album’s production marked a shift in direction for Aesop Rock that was received enthusiastically by critics and audiences. It has informed his work since, with a line of development capable of being discerned from the titular single of “None Shall Pass,” all the way to “Zero Dark Thirty,” the lead single from the album “Skelethon” in 2012.

Its first full-length album together, “Are You Gonna Eat That?,” was released by Rhymesayers Entertainment in May, 2011, to generally positive reviews and wide publicity that was supported by a several-month tour.

Coming off of “Skelethon” and “Hokey Fright,” an album released in 2013 with singer-songwriter Kimya Dawson under the name The Uncluded, Bavitz, who regularly engages in a heavy touring schedule to support his work, has plenty of his own material to sling at Wednesday’s show in addition to Smith’s own discography and the growing song catalog of Hail Mary Mallon.

“Bestiary,” though only featuring DJ Big Wiz in a recording capacity, was more solidly received than “Are You Gonna Eat That?,” with further praise for the chemistry between Smith and Bavitz.

The stop in Northampton comes in the middle of a two-month tour to promote “Bestiary,” taking Bavitz, Smith and special guest artist Homeboy Sandman across the U.S. from the west to east coast, show by show.

Putting out what would seem like tireless streams of work on their own, the combined, continued productivity of Aesop Rock and Rob Sonic seems to suggest that their polarizing but rich exploration of hip-hop, jointly and separately, is far from over.

Aesop Rock and Rob Sonic will perform at 8 p.m. with Homeboy Sandman opening. Tickets are available for $17.50 in advance or $20 at the door.