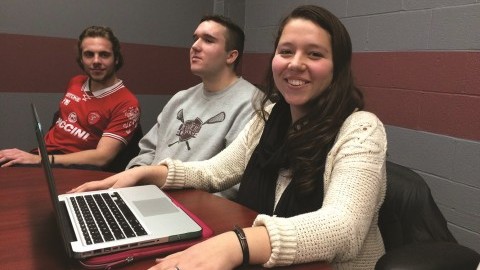 For Reba Cohen, it all began on Masada in Israel. As a junior in high school, she took a nine-hour archaeology class abroad, spending time analyzing the history of the Jewish people of the past who had left their mark on the very earth she was standing on. That’s when she stumbled upon a small, dirt-encrusted artifact that reassembled a carriage bolt.

“I thought it was so cool,” she said, recalling her reaction when she found the object. “I wanted to know why it was there, who made it, what it was used for, how long it has been there for. I just wanted to know everything about it.”

Cohen took pride in the artifact, despite the fact that many around her questioned its authenticity. Some thought she was making up the discovery, telling her that someone had planted it there on purpose or that it was not what she thought it was.

But she did not let others’ doubts stop her from pursuing her newfound passion.

“At this point, I don’t think it really matters what it is,” she said. “What it gave me is so much more.”

Now, she’s taken her love for archeology and brought it to the University of Massachusetts. She is currently the president on the Archeology Club, which has been a Registered Student Organization since the end of last semester.

Among the group of students interested in the field of archeology is Duncan MacIntosh, the current vice president of the club. At 17, MacIntosh restored parts of a ceiling that had been painted over in the Clouds Hill Victorian Museum in Rhode Island. He spent around 30 hours brushing away at the fresco with a toothbrush.

“That was a reassurance,” he said. “I knew that archaeology was what I wanted to do. But when I was scrubbing away, that was when I knew officially.”

According to Cohen, there are currently six executive board members and about 60 people signed up for the club, but only about 20 to 25 people showed up for their first meeting. She is hoping to create an atmosphere where all those who are interested can feel free to talk about whatever aspect of archeology they want.

“Every meeting, I really stress that I want this club to be about us and what you want to do,” she said.

At meetings, Cohen added there is no limit to what club members are passionate about. Members can bring in articles about their interests or bring up specific topics they want to discuss, such as modern archaeology or archeology in Asia.

“(We can talk) about different places all over the world, instead of just a specific time period and place,” she said.

“We really want to reach out and know what people want from the club,” MacIntosh said. “One of my main drives for having the club was that I really wanted people who want to do archaeology or think they want to do archaeology to have the tools to do that … I try to help by thinking of what I would want, what I want help with, and that’s what I’d like to make sure other people have.”

For now, the goal of the club is simply to get its feet off the ground by organizing a core base of members and coming up with ideas for events. According to Cohen, these events include movie nights, faculty lectures, trips to museums such as the Museum of Fine Arts and a dig, hopefully, with the Emily Dickenson Museum. Some members will also be traveling to Tuscany, Italy over the summer as part of a trip led by the UMass classics department.

With these events and meetings, the club hopes it is offering students an alternative to just taking an archeology class.

“Most classes, I find, are very scripted,” MacIntosh said. “But for the club, we can all kind of get together and talk about what it means to us, or what we think archaeology is and how it affects us all.”

Cohen also added that while archaeology may be a small field of study, the club offers more than just a chance for members to study artifacts of the past.

“The definition of (archeology) is the study of ancient things … but I think it’s more than that,” she said. “I think it’s the things and the people and how it connected to society and how it had an impact on people.”

The members of the club also stressed that archeology is for everyone, and that all majors are welcome to explore this field with the Archeology Club.

“A lot of different people from a bunch of different majors can feel connected to (the club),” Cohen said. “Archeology – there’s not a lot of people who are involved with it – but you can connect it to so many things like movies, books, literature and music. I think that is something everyone can find a way to connect to.”