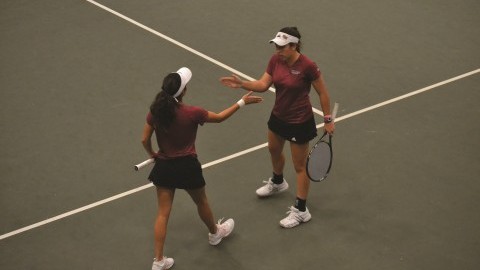 Not many teams are lucky enough to have a regionally ranked athlete on its roster. Fortunately for the Massachusetts tennis team, it has two.

The Intercollegiate Tennis Association, prior to the spring season’s start, ranked Ana Yrazusta and Carol Benito as the 10th best doubles team in the Northeast region.

The two Minutewomen entered the fall season having never played doubles together. Both originating from foreign countries, they share a similar Spanish heritage.

“I’m half Spanish, she is completely Spanish so we both have similar personalities and it matches up really well on the tennis court,” Benito said. “When I’m down she brings me up, when she’s down I bring her up.”

Both Yrazusta and Benito began playing tennis at the age of five, completely unaware of their potential.

But tennis’ impact goes beyond the sport itself. For Yrazusta – a native of Las Palmas, Spain – the sport helped her develop who she is as a person. She says “tennis helped me have an open mind and get along easily with people.”

Benito – an India native – claims that being a tennis player has given her the opportunity to travel and be “exposed to the world at a very young age.”

Their years of practice, determination and global competition readied them for the challenges they face today as collegiate tennis players.

It is arguable that the attitude that they have on the court is just as important as the talent. But attitude can hinder just as much as it can enhance. Yrazusta is an intense player who is filled with passion for what she does, made evident by the way she plays. While her intensity certainly does yield her success, it at times has the ability to hold her back.

Sometimes, the duo balances each other out.

When talking of Benito, Yrazusta says, “she helps me a lot, she has that Indian side, because I’m too intense and I go up and down really easily.”

Yrazusta will learn how to control her intensity as she matures as a player, and much of that will be due to her close relationship with Benito.

Before attending UMass, Benito played for Tulsa University. She found the lack of relationship with her doubles partner to be a major flaw, a problem she does not have with Yrazusta.

“I couldn’t help her if she needed support, it wouldn’t influence her. This is a lot better than it used to be for me,” Benito said.

No team chemistry is complete without the talent to back it up. The girls’ strengths compliment each other in a way that creates a product that has proved to be almost impossible to beat.

“Our games are matched very well also. I am usually better at the volleys and more handsy where she hits the ball very hard so it helps me come and volley it out and set up the point,” Benito said.

The Minutewomen finished the fall season 9-3 in doubles play and so far this season are 4-1, the sole loss coming against No. 57 Boston College.

In the first few days of 2015, the ITA announced its national and regional rankings. It came as quite a surprise to Benito and Yrazusta when they found out where they had been placed.

Benito said that she “wasn’t thinking that far ahead,” and claimed to keep a “one match at a time” mentality, which Yrazusta agreed with. Not only does this speak to their humbling personalities, but also their focused attention.

In any competition, pressure and expectations have the ability to wear on those trying to perform. But neither Yrazusta or Benito see their No. 10 ranking as stressful. When asked if she felt extra pressure from being regionally ranked Benito replied: “a little bit but not that much actually. My goal is to be nationally ranked so I’m not looking backwards, rather I’m still looking forward.”

Yrazusta also doesn’t feel much pressure to succeed, and added “since it’s a doubles team, having someone with you, it’s kind of easier.”

So the ranking does not intimidate them, but how about the high-caliber opposition that they face every game? Nope. In fact, they see themselves as the intimidators. The Minutewomen are confident in their talent and ability to take care of whoever dares to challenge them.

Yrazusta and Benito have helped UMass to a 3-2 record early on in a season that everyone has high expectations for. UMass has aimed to challenge for the Atlantic 10 title for a few years now and that season may finally be here.

And with a force to be reckoned with as its top doubles pair, the Minutewomen feel they’re right on the doorstep.

“The whole team is very pumped, we are close, we are very close,” Yrazusta said. “We all have the same goal and that is win the A-10 conference.”