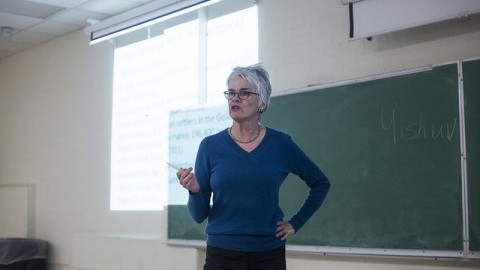 On the heels of recent posters comparing Students for Justice in Palestine to terrorists and anti-Semites found on several campuses across the United States, including the University of Massachusetts, SJP sponsored an educational lecture on the history titled “Palestine: Professors Speak.”

“The creation of the nation Israel meant a displacement of populations for both Jews and Arabs,” said Mary Wilson, a professor of Middle Eastern history. “Everybody suffered.”

The lecture covered a broad range of history, from the initial immigration of the Jewish population, what would become the nation of Israel and to the current difficulties faced by the minority Palestinian population.

Wilson also commented on the ignorance many Westerners about the ongoing tensions, due to heavily biased portrayal by news outlets.

“Framing is very important,” she said. “It’s very difficult to think outside of what we are being shown in the media – it’s hard to maintain an independent mind.”

At the same time, awareness is getting better. When she began lecturing on Palestine, she described feeling nervous and fielding intense arguments from students.

“In the beginning it was very difficult,” she said. “I used to sweat bullets over any lecture on Palestine.”

After the terrorist attacks on Sept. 11, the American youth became more open minded, she said.

“Students came to class wide open for information instead of stampeding to warmongering,” she said. “That was surprising to me.”

“The lecture is one of a couple of events going on this week,” said Annalise Pforr, vice president of SJP, about the groups first Israeli Apartheid Week, which will be an annual series of events held on campuses around the globe.

According the group’s Facebook page, the aim of the week is “to educate people about the nature of Israel as an apartheid system and to build Boycott, Divestment, and Sanctions campaigns.”

The boycotts are targeted against companies like HP, who have “been staunchly in favor of the occupation, or SodaStream – all their factories are built on Israeli settlements in Palestine.”

The organization focuses on education, awareness and peaceful activism. Students are encouraged to visit their Facebook page for more information.

Andy Castillo can be reached at [email protected]