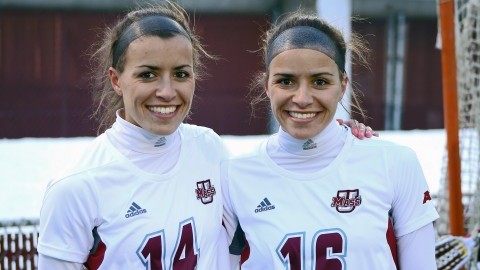 The two are carbon copies of each other–one mind in two separate bodies. Aside from living together, sharing a car and taking all the same classes, above all they think for each other.

“I just feel like we are always together. We’ll just say full sentences at random together at the same time,” Kate said.

“We were doing an interview for UMass Athletics and when we were done the people told us we did a good job and at the same time—not on script—we answered the exact same thing at the exact same time,” Anne said.

The only difference between the two? Kate wears pink while Anne sports blue. The two have matching outfits with their respected colors and to this day, Kate has a pink backpack while Anne has the same exact one in blue.

“I got it down now,” UMass coach Angela McMahon said about telling them apart. “The only thing is if their backs are turned toward me and I can’t see the number on their jersey, because from the back they look exactly the same, but from the front I can tell the differences in the face now.”

For the 21 years that Anne and Kate have been together, almost every lasting second has been spent with one another. When the two are separated for only an hour, they start text messaging each other with a series of questions asking what the other is doing. In fact, the only time the two weren’t in connection was the two minutes that Kate had to wait prior to the birth of Anne.

Growing up in Andover, Massachusetts, Anne and Kate began their athletic careers at a very young age and it comes as no surprise they were at the top of their athletic class as kids and throughout high school, where they were named All-Americans.

The Farnhams are an athletic family. Their father, Mark, was an All-Ivy league lacrosse and football player at Brown. Their older brother, Buddy, was an All-American wide receiver – also at Brown – and was later signed as an undrafted free agent signed by the New England Patriots in 2010.

It was Mark that introduced the twins to lacrosse when he helped start a youth league in Andover that he coached Anne and Kate on. From a young age, the two knew they wanted to play lacrosse and doing it together was always something that the pair envisioned.

“It’s unreal. We are so lucky that we get to play together and we get to keep that special bond together,” Anne said. “It’s just nice knowing that we have each others backs on the field constantly.”

Entering the 2015 season, both Anne and Kate are expected to have more significant roles as the staples of the Minutewomen’s defense that ranked second in the country in 2014, allowing a mere 6.3 goals against per game.

Kate saw more action than Anne in 2014, appearing in 20 games and starting 19 of them. While Anne made 19 appearances last spring, she only started in two of those games.

When Anne was asked what improvements she made to earn her a starting role this year, she struggled coming up with an answer. Kate, on the other hand, knew exactly the answer she was looking for.

“I can answer this one for her,” Kate said. “I think you’ve gotten better at being more aggressive and with her communication. As a defender, that’s huge. We’re juniors now and those are the two biggest things on defense.”

“You’re even more willing to bring the ball up now.”

McMahon believes that with the offseason work the pair did, they’ve emerged as leaders on the field and off it in terms of setting an example for younger players.

“They are the epitome of our team in terms of being positive but also working so hard. They’re some of the hardest workers,” McMahon said.

“They’re winning every single sprint out there. It’s great that they have each other to push but I don’t think what they realize that when they’re pushing each other, they’re actually pushing the rest of the team because they are setting the standard pretty high for how hard to push.”

Anne and Kate plan on staying together for as long as possible, no matter where their lives take them after college and off the lacrosse field. For now, though, the two of them are enjoying the moment – just like they’ve done their entire life.