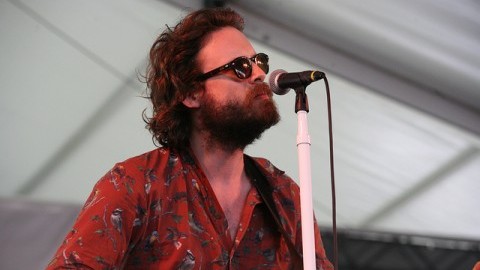 Behind the guise of Joshua Tillman’s Father John Misty persona lays not the typical folksinger stereotype, but an anti-stereotype.

Tillman, the former drummer of Fleet Foxes, invented the Father John Misty name and persona while high on psychedelic mushrooms, sitting naked in a tree in Big Sur, California. It seems like the ultimate sort of folk singer-type story, but it provoked a complete reinvention on Tillman’s part. He went from the morose, defeatist and spare folk of his early solo work as Tillman, to a confident, sarcastic and unapologetic entertainer.

“I Love You, Honeybear,” released Feb. 10, is folk in the classic sense – taking American musical tradition and spreading it over character-study lyrics that always have a way of finding the bigger picture. But Tillman’s second album as Father John Misty is not an album focused on genre, or adhering to the established principles of anyone but Tillman himself.

Tillman will poke fun at romantics, and then, seemingly with a wave of his hand, write a love song as devastatingly witty and heartfelt as any in recent memory. He hates drama, and yet he will create it when it does not exist, with the album’s rich strings or horns.

“I Love You, Honeybear” is remarkable in that it is completely at peace with itself. Tillman seemingly indulges in every lyrical or musical impulse that comes to his brilliant mind with an indifferent shrug. It is a rare instance of an artist who is not only at his creative peak, but knows exactly what he wants, and how he wants to achieve it.

“I Love You, Honeybear” is an album of incredibly vivid, unpredictable characters. The woman who serves as Tillman’s partner in a one-night stand in the brilliantly sardonic “The night Josh Tillman came to our apartment” is someone that can immediately be pictured. After Tillman voices his desire for “the kind of woman who can walk over a man/I mean like a goddamn marching band,” he begins to paint a weary picture of his subject.

“She says like, literally, music is the air she breathes,” Tillman says. As he stumbles through their whirlwind encounter, they sing “Silent Night” together before the nameless woman claims she sounds like Sarah Vaughn. This is enough to provoke Tillman to tell the listener that he “hates that soulful affectation that white girls put on,” before he finally, hilariously asks his partner, “Why don’t you move to the Delta?”

Tillman’s examinations of love in the modern age constantly seem to break the fourth wall. His narration is brilliant enough as it is, but his little anecdotes, his snarky side-comments to the audience, are what make this album so lyrically extraordinary.

On the horn-infused highlight “Chateau lobby #4 (in C for two virgins),” Tillman sums up his partner with the line, “People are boring, but you’re something else completely.” However, he immediately follows that up with, “Damn, let’s take our chances.”

The character that haunts the brilliant “Nothing good ever happens at the goddamn Thirsty Crow,” “blackens pages like a Russian romantic” and “gets down more often than a blowup doll.” To all this, Tillman simply asks, “Why the long face? Blondie, I’m already taken,” before simply adding, “ … Sorry.” Tillman’s sleazy, debonair-type act here is obviously all sarcasm, but he sells the cliché so well that by the end, he inevitably wins you over.

After the snark of “Bored in the USA,” one might be starting to grow tired of Tillman’s persona. But, for the album’s staggering closer, “I went to the store one day,” Tillman drops the act, if only just for four minutes.

Over mostly just his acoustic strumming, Tillman describes meeting the love of his life in the parking lot of a local country store – which is how he actually met his wife. After describing all the ins and outs of one-night stands and romantic flings, Tillman concedes that he “never thought it would be so simple.”

Tillman’s visions for his and his wife’s future are beautifully, almost painfully, sweet.

“I need someone I can trust,” Tillman sings, before adding that he would much rather die of a heart attack while making love to her than in a hospital bed. But even after this confessional outpouring, there is room for one final joke.

Tillman concludes that all of this came “because I went to the store one day.” After such an emotional build, it’s a reminder that Tillman will never commit 100 percent to the ultra serious singer/songwriter persona he spends so much time mocking.

“I Love You, Honeybear” does its absolute best to never sound completely genuine. But, without the concerns of accountability, Tillman feels free to completely speak his mind.

Tillman’s ideas flow brilliantly and fluidly around this record. It is a love story, a character study and a social commentary. But more importantly, it is a complete image of a remarkable songwriter. In his sarcasm and deflection, Tillman lets the listener hear sides of his true self that most songwriters would never reveal. Through the guise of Father John Misty, Tillman has stumbled upon some remarkable truths.