Inspired by a family connection, Heather MacLean continues to thrive on the track 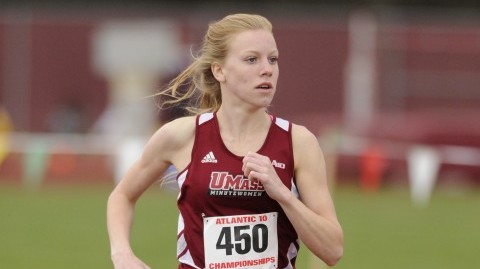 Nowadays, Heather MacLean has a lot on her plate.

She’s fresh off a prestigious appearance at the Tyson Invitational in Fayetteville, Arkansas, which featured some of the best runners in the nation, and is preparing for the Atlantic 10 Conference Championships next week.

But the pressure hasn’t phased the Massachusetts women’s track and field star, and, according to her, the impact of her family and friends has a lot to do with that

Track has always been a family affair for MacLean. In fact, it’s the main reason she does what she does.

For the sophomore from Peabody, it’s her uncle which provides one of her main sources of motivation.

“My uncle has always had a huge influence on me,” MacLean said. “He had so many records at my high school, Peabody High, and I wanted to get some of those records too, so that definitely pushed me to succeed.”

And succeed she did, as MacLean currently holds the school record for Peabody High School in the 400 and 800 meter races. She eclipsed those records by a comfortable margin too, besting the 400 by just fewer than three seconds and beating the 800 by just under 11 seconds.

MacLean races at a veteran’s level, but her ability and tenure as a runner aren’t parallel. The standout runner has only been running track consistently since her junior year of high school.

“I had joined a couple times, but I would quit within the first couple days,” MacLean said. “I had always wanted to do track and have similar success as my uncle did, but it wasn’t until junior year that I was mature enough to be committed to do something like that.”

Soon, she was one of the best runners on the team.

“When I joined track, I didn’t know the meaning of it, the team dynamic and how close the team got to each other,” MacLean said. “I noticed that our team ranking was going up with the points I had gotten in my races and I really got enjoyment out of watching our team do so well. We had some really good people on that team so being a part of that was really cool.”

The Peabody team would end up winning the conference meet that year.

As MacLean improved on the track, more schools started taking notice of her.

During cross country season in the fall of her senior year, MacLean realized this was something that she could do past high school, which motivated her to improve and the results on the track spoke for themselves.

MacLean went on a few recruiting trips as a senior and fielded interest from schools such as Merrimack, Stonehill College and Holy Cross, but it soon came clear to her where she wanted to be.

“UMass was the most up front and real with me, instead of promising me a bunch of empty promises,” MacLean said. “I really liked the team dynamic they have here and coach Julie (LaFreniere) was just awesome. This school has so much to offer so I knew that if I came here I would have a lot of opportunities.”

MacLean stayed with senior athlete Katie Powers on her recruiting trip. Powers, who was entering her junior year at UMass at the time, was up front with MacLean and laid out all of the legitimacies of the program and made her feel comfortable.

By this point, it was pretty obvious for MacLean where she wanted to go to school.

MacLean’s fueled by her desire to break records and leave her mark on the program she continues to help grow. Currently, she’s well on her way.

MacLean continues to have a masterful sophomore campaign. Already this season, she has qualified for New England’s and the ECAC championships. On top of that, she broke the record she set in last spring in the 800 meter, with her two minute, 7.36 second time in the race at the Terrier Classic earlier this month.

When asked how she has attained such success, MacLean expressed one major theme: strength.

“Being stronger and our program being stronger has had a huge impact on mine and the team’s success,” MacLean said. “We did a lot more this year than we did last year. Our program’s lifting wasn’t as good last year as it is this year. We are also doing other things like pool running and extra exercises that help our biomechanics.”

These workouts have shown great dividends for the team as they continue to put up great performances all around the team.

The regular season for indoor track is coming to a close, so with the A-10s coming this weekend and the New England championships looming a few weeks away, MacLean has very straightforward goals for the next part of her season.

“My main goal no matter what is to score as many points as I can for my team,” she said. “I want to help this team reach the most success that it can so if I can do my part that is all that matters to me.”

MacLean also has a loftier goal of qualifying for nationals in the 800 meter race, which isn’t an easy task. She believes she would need to run around a low 2:06 in order to qualify, which is a whole second faster than her current best.

The women’s track and field team has had great success up to this point in the season and MacLean sees no reason why that can’t continue.

“I think as long as we stay strong and continue to do what we’ve been doing we should be fine the rest of the season,” MacLean said. “We can’t let the competition and other things get to our heads. We need to make sure we keep our eye on the prize.”

In just two short years here at UMass, MacLean has molded herself into one of the best runners on the team and a leader for the future. She already holds a school record and continues to impress meet after meet. What more can MacLean do and where will she be when all is set and done at UMass?

“I hope to have a huge impact on the team and how the University views the team,” MacLean said. “I’ve noticed that since I’ve come in the girls especially in the 800 have gotten so much faster. People aren’t just settling for when they set a (personal record). They continue to shave seconds off and improve.”

MacLean hopes that future girls that come into the program are motivated by the success that she has had.

“I currently hold the 800 record so I want somebody to try and beat that,” MacLean said. “I want to be a figure that people try to chase after and leave a mark and show that anybody is capable of doing that. I hope that when I’m all done with my career at UMass I have done everything I can to help this program grow and motivate the future girls to grow it even more.”