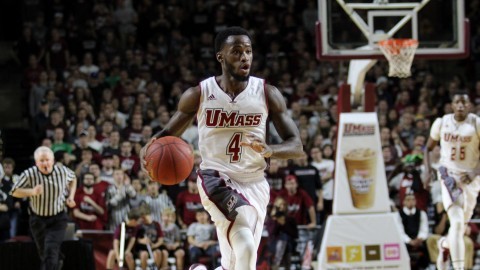 OLEAN, N.Y. – It hasn’t been the kind of year Jabarie Hinds probably imagined.

The junior transfer from West Virginia’s much-anticipated debut season for the Massachusetts basketball team has been trying at best. He’s battled inconsistency, fallen in and out of the starting lineup, and has seen his minutes fluctuate along with his nightly production.

The divergence in Hinds’ good games compared to his bad can be maddening. He keyed consecutive wins with strong second half performances at Saint Louis and Fordham, but followed that up with three points on 1-for-6 shooting Sunday against La Salle.

On Wednesday night, the good Hinds came through with the biggest shot of his UMass career.

The guard knocked down a 3-pointer with 8.6 seconds left to lift the Minutemen to a thrilling 55-53 win over St. Bonaventure at Reilly Center, extending UMass’ winning streak to five games and launching it into a four-way tie for first place in the Atlantic 10 standings.

“It means a lot. Not just for me, but for my teammates and the coaching staff,” Hinds said.

Said UMass coach Derek Kellogg: “That gives him some confidence to feel some value to the team. Sometimes in games like these you just need some guys that can make some shots.”

It was the Minutemen’s most improbable and emotionally charged victory of the season. They battled a six-point deficit that seemed much larger given their offensive struggles throughout the game’s final minutes. They were pressing, forcing shots and uncomfortable against the Bonnies’ suffocating defense.

But UMass, possession by possession, chipped away and used a combination of foolproof execution and some good fortune to break through and silence the hostile crowd of 3,786.

A Dion Wright jumper with five minutes, 14 seconds left in regulation gave St. Bonaventure its biggest lead of the game, 51-45. The teams traded baskets and the Minutemen found themselves back down six points with 2:45 to play.

Cady Lalanne finished a layup to make it 53-49, then Derrick Gordon went to the free-throw line for a one-and-one after getting fouled while grabbing a rebound off a Bonnies miss. Gordon hit the front end, but missed the second. Andell Cumberbatch corralled the rebound, but Trey Davis stole the ball and drove the hoop before being fouled on his way to the rim.

Davis hit both free throws to cut the deficit to 53-52. Hinds locked down on Marcus Posley defensively and forced a tough shot to give the Minutemen a chance at a go-ahead bucket. Gordon drove to the hoop and fed the ball to Lalanne underneath. The senior center up-faked once, then was stripped and the Bonnies regained possession clinging to a one-point lead with 23 seconds left.

St. Bonaventure’s inbounds play was designed to go to Posley – it’s best free-throw shooter. Cumberbatch was looking for Posley to pop to the corner, but instead the guard cut left and went right. An errant pass by Cumberbatch wound up right in the hands of Gordon.

“It was like all I had to do was pop right there and it came right to me,” Gordon said, later adding, “God works in mysterious ways. I missed that last free throw and Trey got the rebound, made two free throws. Then the ball just magically comes my way.”

Said Posley: “It was a miscommunication.”

Gordon swung the ball out to Davis, who flipped it to Hinds. Hinds buried the contested shot and sent the UMass bench into euphoria.

Hinds’ initial reaction? Time to lock down on Posley.

“Right after the shot, I was just thinking, ‘Posley, Posley Posley,’” Hinds said. “I was just looking for him. If he got ball I just wanted to make him put up a contested hard shot.”

Thanks to Hinds’ effort, Posley didn’t get the last shot. Instead Cumberbatch misfired on a forced 3-pointer and the Minutemen’s bench stormed the court and mobbed Hinds in elation. It was reminiscent of the way St. Bonaventure’s students crowded the home floor after knocking off then-No. 21 UMass last season.

“We got them back. We got a little out of character. We were going to their fans, and stuff like that, taunting them,” Gordon said. “We were just so caught up into the moment, we were happy. I didn’t care how we won the game, as long as we won the game that’s all I was worrying about.”

Lost in the late-game heroics was the Minutemen’s stifling defensive effort, particularly on 7-foot center Youssou Ndoye. After dominating for 14 points and 13 rebounds in the teams’ first meeting Jan. 3, Ndoye was held to just four points, seven rebounds and five turnovers after being double-teamed throughout the game.

“Cady did a better job of forcing him off the block and Tyler (Bergantino) did a good job of banging with him for a few minutes,” Kellogg said.

The Minutemen took a 30-23 lead into intermission after arguably their strongest defensive half of the season. UMass forced 11 first-half turnovers and held the Bonnies to 34.5 percent shooting from the floor.

The Minutemen opened the game with five straight defensive stops. After trading baskets throughout the middle part of the period, UMass closed the half on a 10-2 run in which five different Minutemen scored, and held the Bonnies without a basket for over four minutes.

A promising first half for UMass turned ugly in the second as the Bonnies opened the half on an 18-5 run over eight minutes to take a 41-35 lead.

Davis led the Minutemen with a quiet 12 points, eight of which came in the second half. Lalanne added 10 points and five rebounds. Posley scored a game-high 13 points for the Bonnies, while Cumberbatch and Wright scored 12 and 10 points, respectively.

UMass will try to extend its winning streak to six games when it hosts Duquesne at 4 p.m. Saturday.