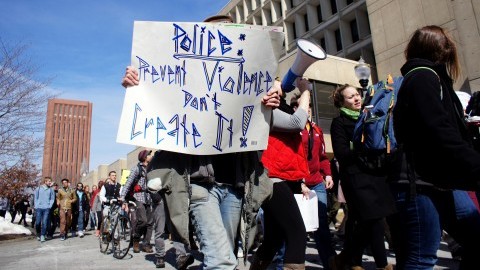 Acting on the supposition that a partial guest ban in Southwest Residential Area resulted in a peaceful student celebration following the Super Bowl earlier this month, the University of Massachusetts will ban guests from campus from Thursday, March 5, at 8 p.m. to midnight on Sunday March 9. University administrators have been planning for nearly a year to mitigate the impact of what, according to MassLive.com, they only refer to as “March 7,” the date of this year’s “Blarney Blowout.”

Last spring on March 8, thousands of people, many carrying containers filled with alcohol, gathered in off-campus areas across town to celebrate the pre-St. Patrick’s Day event that began as early as 1999, indicated by a Sept. 2011 “Half Way to Blarney” Facebook event hosted by downtown bar McMurphy’s that was billed as the “12th annual” and to which over 1,000 people were invited. “Blarney Blowout,” which has sadly evolved into a stalwart campus tradition, began as a promotional event by businesses in the downtown area, which always missed out on Bay Staters’ rabid St. Patrick’s Day passions due to the Five College spring break schedule.

“Blarney’s” 2014 iteration resulted in police use of chemical munitions, widespread property damage and over 70 court summonses and 58 arrests, of whom only 20 were UMass students.

The extensive effort by UMass to include students in this year’s “Blarney” preparations is laudable, and new University connections with town businesses – local bars will not be doing promotions or “advertising” that day – may be the public relations shift needed to change Amherst’s atmosphere for the weekend.

No university wants the ‘zoo’ legacy reinforced by “Blarney,” and as a student, I stayed in my room until noon last year, avoiding the crowds that woke me with drunken revelry in my Honors College common room at 8:30 a.m. on a Saturday. The over 7,000 guests registered on campus on the night of Friday, March 7, 2014 certainly contributed to the flood of students that slowed North Pleasant St. to a halt and stormed the Brandywine apartment complex in North Amherst.

Yet the reported “Blarney” crowd of 4,000 represents barely over half of the guests who visited Amherst that weekend, and that crowd included non-guests as well. Now, thousands of guests uninterested in participating in Blarney, perhaps some prospective students, won’t be able to visit campus for four days, including a full working Friday. Why? UMass doesn’t trust its students.

The actions of a relatively small number of students, whether just the 20 UMass students arrested or the couple thousand who gathered, dictated a blanket policy that applies to everyone who lives on campus. Collective punishment for the actions of a few extremists? Sounds a lot like another too broad policy the University had to reverse this week.

Chancellor Kumble Subbaswamy said UMass would “adopt a more restrictive guest policy” after analyzing the report’s findings. But shifting from fair access to a complete four-day ban ignores the rights of over 10,000 residents who pay thousands of dollars to live in the dorms.

Some restriction on the number of guests on campus for the weekend is completely justified – a reduction from the existing policy of four guests per person and the 10 guest per room limit to two per person and four per room for that Friday and Saturday would be more reasonable.

A MassLive.com timeline of the 2014 “Blarney Blowout,” so much worse than those before that it received national coverage and necessitated spending hundreds of thousands of dollars to investigate, shows that the entirety of the event lasted approximately nine hours, from 5:30 a.m. to 2:30 p.m. on Saturday, and the bulk of it only four hours, from 10 a.m. to 2 p.m.

Amherst and UMass police will heed the report’s recommendation that they activate all officers for the weekend. More than 100 people will be available to respond to any events this year.

While the APD and UMPD chiefs defended the actions of their officers after the release of the Davis Report, the report highlighted several areas that police should improve for future mass gathering response. Officers likely caused the gathering to worsen when a “commander decided to move in on the crowd” without enough bodies, “result(ing) in an overreliance on chemical munitions,” wrote Diane Lederman for MassLive.

As at the post-Super Bowl gathering earlier this month, APD and UMPD officers should engage students with the community policing recommended by the Davis Report. This made the difference from previous post-championship gatherings at UMass, where violence, property damage and arrests were the norm. Amherst Town Manager John Musante supports more readily “embracing” community policing initiatives, and highlighted that last September, town police spoke to several bar owners who were planning a “half-way to St. Patrick’s Day” event.

New procedures and actions developed by town officials make me optimistic that future “Blowouts” can be prevented, or at least deescalated. But the overall picture – many more police officers, extreme restrictions on student freedoms and a lack of trust in all students due to the possible actions of a few – still deeply concerns me.

Musante said Wednesday to the Boston Globe (Full disclosure: the author was quoted in the story) that he wanted to preserve the “positive momentum” that started with the Super Bowl celebration. I hope students aren’t just along for the ride.

Zac Bears is the Opinion & Editorial Editor and can be reached at [email protected] and followed on Twitter @zac_bears.