North Carolina ‘a ton better’ than UMass in 20-8 win 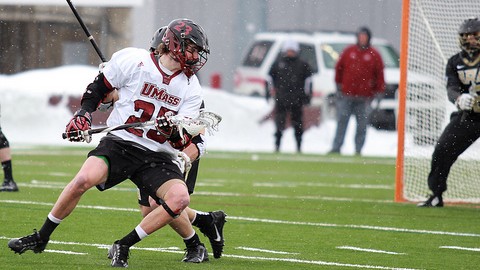 When 28 goals are scored in a lacrosse game, it usually signifies a back-and-forth battle between the two teams.

Unfortunately for the Massachusetts men’s lacrosse team, its game versus No. 6 University of North Carolina didn’t go like that.

The Minutemen (0-2) suffered a 20-8 setback against the Tar Heels (3-0) Saturday afternoon in Chapel Hill, marking the second straight season in which they have given up that many goals in a single game.

“North Carolina was a ton better than us,” coach Greg Cannella said. “We didn’t win faceoffs early in the game again, similar to last week. We hung in there and our guys fought hard and hustled, but our execution needs to be a little bit better on the offensive end.

“Obviously scoring 20 goals we need to be better on that end too defensively, but North Carolina is a very, very good offensive team.”

The Minutemen lost 19 of 32 faceoffs, winning only 25 percent in the first half. This led to them constantly being on the defensive side on the ball, and not generating any offensive momentum.

“It’s not being able to get the ball back,” Cannella said referring to the constant pressure his team was under. “They’re stringing goals together and we’re not getting the ball back.

“When we do get the ball, our guys feel like they have to score five goals at a clip. You’re rushing some shots and taking some shots you probably shouldn’t take, so it’s sort of a snowball effect and was certainly a big factor for us.”

UNC was led by the trio of Joey Sankey, Jimmy Bitter and Luke Goldstock, who combined for nine goals and eight assists against UMass. Sankey recorded seven points, with Bitter tallying six and Goldstock adding four.

“It’s hard, especially they way they do it,” said Cannella on trying to contain the three. ”They play quick offense and are going to the cage while they’re subbing, they don’t care. They usually have favorable matchups, at least Bitter and Sankey do, Goldstock made a couple good plays today.

“When your attack has 17 points you’re usually gonna win the game.”

Earlier in the week, Cannella talked about the capabilities a team like the Tar Heels has to deliver a “knockout punch” and put the game out of reach.

In this contest, it seemed to be delivered in the early goings of the game. After a Nick Mariano goal was waved off due to a timeout being called just seconds before by the Minutemen, UNC came out of the break and tacked on three more goals to push its lead to 7-2.

“It’s 4-2 and I call timeout but we pick up a groundball and throw it to Nick Mariano and he scores, but we called the timeout before,” Cannella said. “I thought possession was more important at that time off of a loose ball.

“We went back out there and they kind of had a streak there so you look at that situation where they put three or four on us after that.”

With an upcoming game next weekend at Harvard, Cannella knows it’s important for his team to stay positive and focused moving forward.

“I think we need to stick together and continue to work hard in our preparation,” he said. “Harvard’s ranked (No. 10) in the country coming into this game. Our schedule has been very difficult early on, and hopefully that helps us get a little bit tougher mentally. We gotta win faceoffs, make saves, defend, and finish the ball. A simple game.”