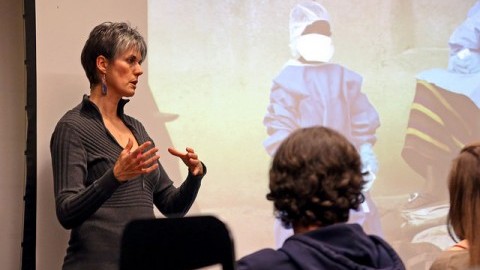 Deborah Wilson, a nursing student at the University of Massachusetts, shared a first-hand account of her experiences volunteering with Doctors without Borders Tuesday evening in Skinner Hall, describing her time in Liberia during last year’s Ebola outbreak.

During her presentation, “A Day in the Life of an Ebola Treatment Center,” Wilson began by recounting what it was like for volunteer nurses at the center.

“It was the rainy season and 100 degrees every day,” she said, while adding it was necessary to wear Plastic Process Equipment (PPE) in such heat. According to Wilson, the nurses were so drenched in sweat after working in the treatment center that “it was literally like you jumped in a river.”

These conditions weren’t the only struggle Wilson and the volunteer nurses she managed faced. Patients suffering from Ebola would become delirious in later stages of the virus. Wilson said these patients would pull out their IV’s and resist treatment. According to Wilson, it became a danger to the nurses themselves in extreme cases.

“I was once pinned against a wall by a man who had gone completely psychotic,” she said.

This treatment center, by necessity, was located away from any modern or well-equipped health facilities, and Wilson described in detail the state in which many Ebola patients had to live.

“Patients are lying on the concrete floor covered in vomit, covered in diarrhea … some were bleeding profusely,” she said.

Wilson said people who were suspected to have Ebola had to be put in quarantine together while awaiting the result of a blood test – the only guaranteed way to know if they had the disease – due to lack of space. A test, which would normally take five hours, took more than three days because of the lack of proper equipment.

This changed in the weeks Wilson was there, as more equipment and resources were donated. But even with every resource they could gather, most of the patients died.

“We had to create a cemetery,” Wilson said. “We didn’t have enough staff to transport the bodies back to the villages.”

The flow of contaminated material coming out of the facility was virtually endless. All of it was thrown into a pile, which burned constantly, according to Wilson.

The facility also faced problems from the communities from which many of the patients originated. In Liberia, there was significant distrust for those running the facilities, and rumors circulated among many of the villages. The bodies of those who died of Ebola had to be put in protective body bags to prevent the spread of the virus, and according to Wilson, this gave rise to a rumor that organs were being stolen.

Some in Liberia even believed the treatment center was deliberately giving its patients Ebola. Wilson went on to explain that these rumors were combated by using an outreach program meant to educate the people of Liberia about Ebola and what to do in order to prevent it from spreading. They also encouraged survivors of Ebola to go on local radio shows to answer questions and quell rumors about the treatment facility.

But Wilson also mentioned that although these efforts have been largely successful in Liberia, great care must be taken not to force the issue and to respect local cultures.

Wilson also mentioned one thing that helped to quell mistrust was the decision to allow family members to see their ill loved ones. Wilson explained that family members had to wear PPE but were allowed in. This not only dispelled mistrust but also humanized the job for her. The presence of the families helped her remember those being treated weren’t just patients, but human beings.

Wilson spent six weeks working six hours a day treating those with Ebola, along with completing a semester’s worth of online work for her bachelor’s degree at UMass. She explained meals generally consisted of white bread, fried potatoes, mayonnaise and low quality meat.

“Our vegetable was ketchup,” Wilson said.

Wilson said the Ebola outbreak has all but destroyed the healthcare system of Liberia, and when asked what she thought the United States’ role should be, she responded by saying, “We have an ethical and moral obligation to keep supporting these countries.” She added that she was happy that she could help those who suffered from Ebola.

“We do it because people do survive,” she said.

In the past, Wilson criticized the mainstream media as well as many politicians for creating “misinformation and hype” around the subject of Ebola, saying that they were overly focused on the few cases in America, and not with the true story of what was happening in Africa. She explained Ebola spread so quickly because of widespread poverty and lack of equipment to deal with the problem. She said that the U.S.’s fearful response was knee-jerked and misinformed.

In October of last year, Wilson wrote a letter to the editor of the New York Times, which expressed her outrage at the response of politicians to the Ebola crisis and specifically criticized the restrictive treatment of healthcare workers, including Kaci Hickox who was quarantined last year under a policy put in to place by New Jersey Gov. Chris Christie.

Wilson also believes these presentations are worthwhile to the public overall.

“It helps educate people about what it is to really like working with Ebola,” she said.