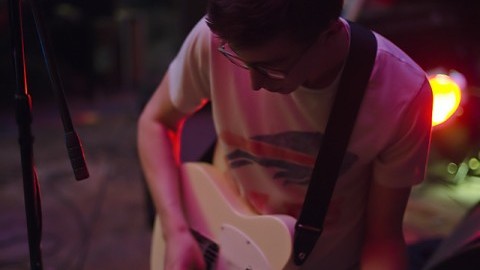 Dean Engle’s songs are not the most sophisticated things in the world. And as the listener discovers on one of his singles, “Simple Songs,” he would be the first to tell you that.

Engle hits just about every nail on the head with Quarterbacks’ masterful, self-titled debut LP, except for the last line of that lyric. Engle’s songs come at you fast and furious – in 21 minutes, there are 19 of them. And pretty much every single one is perfectly capable of saving your soul.

A trio hailing from New Paltz, New York, Quarterbacks labels itself as “twee-punk” and flawlessly combines the best elements of both genres.

Its first album’s 19 songs are full of vulnerabilities and deep insecurities but also include a beautifully naive sense of optimism. But it is a clear sense of optimism, which is how the band can still attach “punk” to its description with a straight face. These songs have a way of cutting to the very heart of romance: the inherent tension, longing and the powerful swells of emotion that can stem from the smallest of interactions.

Though Engle often paints rosy pictures, one never gets the feeling that he is stretching the truth even slightly. “Quarterbacks” is a phenomenal punk album in that it tells the listener enlightening bursts of truth, doing so at warp speed but without being preachy or becoming aggressive in its delivery.

With so little time to make its case – the longest track on the LP clocks in at one minute, 40 seconds – these 19 songs practically fall over themselves in their attempts to dole out their melodic goodies all at once.

“Center” rips through a verse, bridge, chorus and beautiful breakdown in just about a minute. “Weekend” could spend a lifetime on its nostalgia-inducing, evocative opening riff, but after less than 10 seconds, it explodes into a frantic expression of romantic insecurity. The three verses of “Twenty” manage to provide a succinct summary of romance in the context of growing up in 42 seconds. On its closer “Point Nine,” Engle turns a blind eye to everything but the absolute present.

While some may look at the brevity of Engle’s songs as the main weakness of “Quarterbacks,” it is actually one of the album’s main strengths.

On “Point Nine,” Engle shouts, “Sometimes I wonder if I should slow down/to make sure my heart stays intact/but I trust you.”

And if there is any point to be made about “Quarterbacks,” it is that the listener never wants Engle to slow down because this record is an absolute thrill ride. And as fast as it is, it is incredibly sad when it comes to an end.