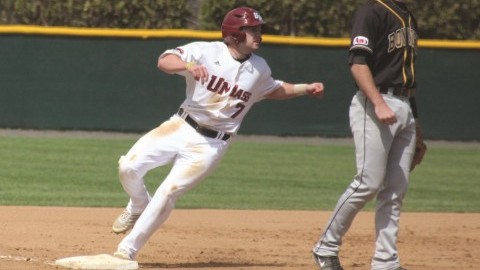 The last time Robert McLam took the field for the Massachusetts baseball team was May 18, 2013. He went 3-for-4 at the plate, fell a home run short of hitting for the cycle, drove in three runs in the process and helped UMass finish the season on a high note, beating Temple 11-9.

A couple months after the Minutemen’s season finale however, UMass soon found out that it would be without one of its best hitters for the entire 2014 season.

McLam was playing in a summer league game when he tore his ACL, an injury that would require him to undergo surgery and miss an extended period of time.

“I was at second base and was going up the middle for a ground ball and I planted my back foot and as soon as I turned to throw the ball my knee just popped and my ACL tore,” McLam said in recollection of the injury. “I assumed something happened because there was a loud popping sound.

“I didn’t know whether it was ACL, MCL, but I knew something happened.”

Minutemen coach Mike Stone said that while he was upset about McLam’s diagnosis, he understood that injuries are part of baseball and that another guy needed to step up in McLam’s absence.

“It was disappointing but as a coach you try not to be devastated by injury,” Stone said. “You gotta move on and hopefully someone will take over.”

After hearing that he would miss all of his true senior year, instead of finishing his UMass baseball career on injured reserve, McLam received a medical redshirt, allowing him to claim eligibility for the 2015 season.

McLam said the injury took an initial emotional toll because he knew that he wasn’t going to be able to graduate and finish his baseball career with the people he’s known since coming to UMass as a freshman.

“It was tough at first knowing I wasn’t going to be able to go out graduating with the people I came in with.” McLam said. “Obviously you wanna go out with the guys you came in with.”

The physical process of healing his knee was also a challenge, as his daily physical therapy regimens really pushed him.

“Each day they had to stretch me out. I had to do six to eight exercises each day to strengthen my knee and get the flexion back. It was painful as heck.” McLam on his physical therapy routine. “It was a struggle waking up and going to physical therapy each day.”

But McLam fought through the pain and struggles because he knew his hard work and determination would eventually pay off once he stepped back onto the field.

“I’d wake up each day thinking of the long-term goal of what I was coming back to, a great season with the boys,” McLam said. “Just to be with the team, have one more good year with the team, make the A-10 tournament and win it, that’s the goal.”

After eight months of rehabilitation, McLam said his knee is feeling much better and that he is very close to regaining his pre-injury form.

“My knee is feeling a lot better than it was … It’s pretty close to 100 percent.” McLam said.

Stone agreed, saying that he has been impressed with McLam’s return thus far. When asked if there would be any limitations in his play, Stone’s answer was simple: “Absolutely not.”

Stone added that he is excited to get McLam back in his lineup due to the secondbaseman’s consistent offensive production.

“He is a real good offensive player.” Stone said. “Not only does he hit, he can steal bases, he can bunt, he can hit and run, he just can do a lot of things with a bat and provide offense. We have missed that part of it.”

McLam’s return can’t come a moment too soon as the Minutemen missed his offense last season in which they struggled through a 14-31 record.

Now after almost two years since his last baseball game in a Minutemen uniform, McLam said he just wants to return to the field and play ball.

“It will be a great thing just to get back out there, just to smell the grass honestly,” McLam said. “It’s just been a while since I’ve played for UMass, it will be a really good feeling and it will be rewarding that I made the full journey back from the ACL surgery.”

McLam will get this chance when the Minutemen return to action on Saturday, March 3, for their season opener at Central Connecticut.