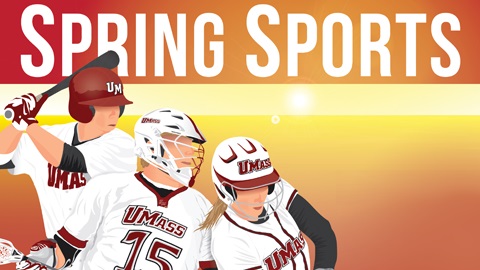 UMass baseball to rely on the moxie of Grant, LeBlanc
The Minutemen have two senior workhorses atop the starting rotation in Andrew Grant and Connor LeBlanc, who were both recently named team captains.

Robert McLam anxiously awaits his chance to lead UMass baseball’s offense again in his return from an ACL injury
After a long, painful road back to recovery, the redshirt senior will return to his position at second base in the Minutemen’s opener on March 3.

UMass softball enters 2015 brimming with high expectations
Minutewomen coach Kristi Stefanoni expects her team to contend for the Atlantic 10 Conference title and reach the regional round of the Women’s College World Series.

Playing to the max: Nick Mariano brings strong work ethic, offensive reliability to UMass lacrosse
Coming off a terrific freshman season, Mariano aims to lead the Minutemen to a bounce-back season and a return to the CAA playoffs.

Ryan Izzo bears significant responsibility as UMass lacrosse captain
Izzo, who is a senior, hopes to solidify his legacy at UMass by bringing the Minutemen back to the playoffs.

UMass lacrosse forges on with youthful roster
The Minutemen have only 12 upperclassmen on the team and are searching for reliable underclassmen to fill the void.

Double trouble: How Anne and Kate Farnham live the same life
The twins have been doing things side-by-side since they’ve been born and now they’re ready to take the next step forward for the UMass women’s lacrosse team together.