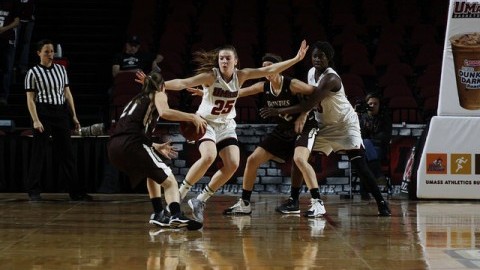 The Massachusetts women’s basketball team saw its longest losing streak of the season extend to four games with a 77-57 loss to St. Bonaventure Saturday afternoon.

The Bonnies (12-10, 2-7 Atlantic 10) won their second conference game of the season, both coming against UMass (8-12, 2-6 A-10), despite the absence of second-leading scorer Hannah Little, who reportedly violated team disciplinary rules.

Both teams came out hot through the first eight minutes, as the Minutewomen held an early 14-13 lead behind efficient shooting from the floor. UMass began 6-for-9 and 2-for-3 in 3-point attempts, while St. Bonaventure opened 5-for-10.

Despite the encouraging start, UMass found itself in an eight-point deficit at the end of the half.

The Bonnies maintained control in the second frame, opening on a 13-2 run led by Nyla Rueter’s three consecutive 3-pointers. Rueter finished with a game-high 22 points, including 16 in the second half.

The Bonnies’ lead ballooned to 26 points, but Kim Pierre-Louis, Rashida Timbilla and Alyx Stiff each played crucial roles in instrumenting a late UMass run to cut the lead to 19.

Pierre-Louis led the Minutewomen with 14 points on 6-for-12 shooting.  The senior scored 12 of her 14 points in the second half.

“I decided to be a little more aggressive,” Pierre-Louis said. “Time was pressing and we needed some more offense so I took it upon myself to try and make some baskets and try and create opportunities for my teammates as well.”

Timbilla also saw a majority of her scoring come in the second half, dropping six points during the final offensive push for the Minutewomen. She finished with eight points, three assists and led UMass with nine rebounds.

Even with the late push from a wide range of players, the offense proved to be too little, too late for the Minutewomen.

“Offensively we didn’t do a good job,” Dawley said.  “(Emily Mital) had one of her better offensive games and ended up with 10.  I thought Maggie was a great spark coming off the bench but offensively there weren’t a lot of sparks so we struggled once we fell behind.”

Visibly upset after Saturday’s loss, UMass will attempt to get back on track in conference play this Wednesday when it travels to Kingston, Rhode Island to battle the University of Rhode Island. The Minutewomen then play LaSalle on Saturday in Philadelphia, Pennsylvania.

Dawley added: “There’s not a team you can be relaxed going up against.  All we can do is regroup.  We’ve talked about things that we need to do mentally to prepare ourselves and translate what looks like a great team on Friday into gameday and that’s what we have to figure out.”

There are eight games left for UMass before the A-10 tournament starts on March 4.

“We have to be tougher on each other and we have to demand more from each other,” Dawley said.  “Obviously we’ll come back to work on Monday.”

Frank Corona can be reached at [email protected]