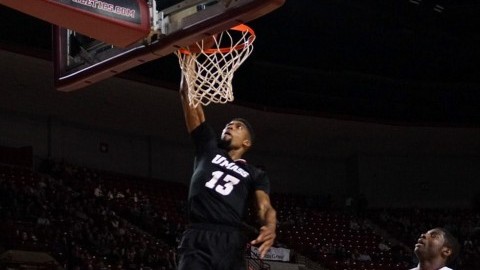 Saturday’s game for the Massachusetts men’s basketball team was a perfect snapshot of the ups and downs it has endured throughout the 2014-15 season.

At times the Minutemen looked legitimate, forcing turnovers leading to transition dunks and layups in a controlled frenzy of up-tempo basketball.

Then were other times where UMass players stood still on offense, watching and waiting for someone around them to make the play, rather than be the aggressors.

Despite the rollercoaster of events, the Minutemen pulled away in the second half to beat Fordham 82-74 in front of 5,238 at Mullins Center

“We’re happy to get off that three-game losing streak. I thought our guys came out and fought and battled, UMass coach Derek Kellogg said. “We didn’t have everything going obviously early in the first half or even throughout the first half, but they fought and persevered.”

Trailing 41-36 with 17 minutes, 14 seconds remaining UMass (17-12 10-6 Atlantic 10) went on a 13-0 run that jump-started its offense after struggling to string together consistent play up to that point. During that run, the Minutemen had six steals that led to transition baskets. Fordham did not attempt a shot during that run.

“Yeah I think we feed off of energy from ourselves and also from the crowd. There were a lot of good hustle plays within that, which is something that we pride ourselves on. We kind of re-talked about what we thought UMass basketball was,” Kellogg said.

The Rams (9-18, 4-12 A-10) had plenty of opportunities to get back into the game, as they came within one possession of the Minutemen on seven different times throughout the rest of the second half.

Trailing 77-74 with 24 seconds left, Fordham’s Mandell Thomas, who finished with a game-high 29 points, forced up an off-balance 3-pointer which fell right into the hands of Derrick Gordon, securing the win for the Minutemen.

Fordham coach Tom Pecora said that the plan was for Thomas to attack the basket and come off a series of screens. However, as the play broke down his team panicked causing him to force up the bad shot.

“Yeah, we’ve had some guys come in here and put on decent performances as of late. It’s like they’re hitting some shots that maybe aren’t normal, Kellogg said. “That last one that he missed, you’re kind of thinking, praying, whatever you want to call it as the shot goes up.”

Gordon led UMass with 20 points and made five free throws in the final 1:10 of the game. But his biggest stretch came over a stretch of 3:08 in the first half where he scored nine points to give the Minutemen a 14-11 lead.

“From the start I was just trying to come out with a killer mindset. I think it kind of carried over to the rest of the team,” Gordon said

“I believed if we stay in that mindset we can be a very great team. We share the ball, we all have confidence in each other and that’s going to take us a long way.”

Maxie Esho finished with 17 points, 14 of which came in the second half, to go along with his eight rebounds. Donte Clark chimed in with 15 points while Cady Lalanne finished with six points, 12 rebounds, and five blocks.

Andrew Cyr can be reached at [email protected], and be followed on Twitter @Andrew_Cyr.