Students for Justice in Palestine, administration react to inflammatory posters 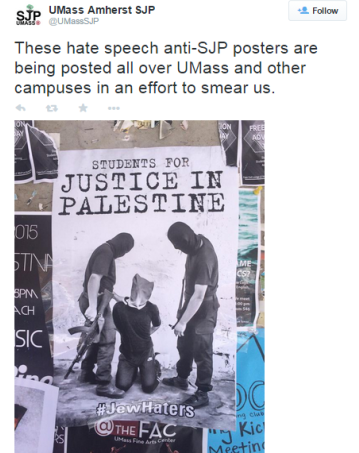 In the wake of the discovery of several posters on the University of Massachusetts campus likening Students for Justice in Palestine to terrorists and anti-Semites this week, SJP members have reached out to the University for support.

SJP Treasurer Evan Scribner said the organization has been in contact with UMass’ Registered Student Organization advising center, known as The SORC, the Dean of Student’s Office and the UMass Police Department.

“Everyone we spoke to took this really seriously and the University offered their support on the issue and they’re going to be investigating and following up,” Scribner said.

Enku Gelaye, vice chancellor for Student Affairs and Campus Life, said in a statement Wednesday, “This poster was deeply upsetting to members of our student community. We know similar misleading posters have been found on campuses across the country as part of an organized effort connected to an outside group. Such actions serve only to undermine civil discourse and prevent sustained conversations on difficult issues.”

“This, we feel, is on the same exact level of that,” she said. “We hope that the same measures are taken here as back in the fall.”

Pforr and Scribner said some SJP members feel unsafe on campus, and several have faced verbal and physical harassment at UMass in the past, but declined to give any more details.

Scribner added, “It always just seems like something that happens somewhere else, so this is kind of a wake up call to us.”

The posters were found on campus bulletin boards, which are the only designated place flyers can be hung without approval, according to Pforr and Scribner. SJP has called on the University to remove the posters, but Scribner said the school must consult legal council to find out if it is able to do so.

Both Pforr and Scribner were also quick to point out SJP is not linked to Hamas and does not support the organization.

“We condemn all violence perpetuated by any party,” Scribner said. “SJP is an explicitly anti-violent organization. … And we do not receive money from Hamas.”

The two clarified the purpose of SJP is to serve as a microphone for the Palestinian people and as a channel to get their “ideas and struggles into the American public conscious.”

The organization modeled its strategy after the academic boycott campaign against South Africa’s apartheid system in the 1980s.

“We use the apartheid analogy because both situations have two different sets of laws for two different ethic groups,” Scribner said.

Pforr said this connection is especially important because UMass and Hampshire College were the first to divest from apartheid South Africa.

Hampshire College was the first of several universities to divest from Israel, she added.

As of Wednesday night, no one claimed responsibility for the posters.