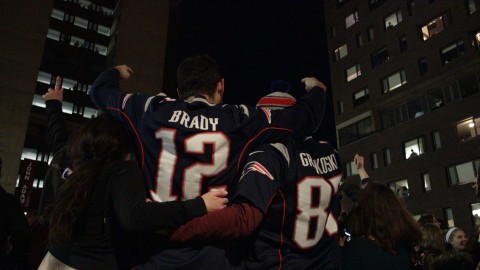 Last week, University of Massachusetts administrators publicized several policies intended to limit the possibility of a large student gathering in Southwest, including a 24-hour ban on guests in all campus dormitories starting at noon Sunday. UMass officials also announced that several watch parties would be scattered around campus, in addition to a larger gathering in the Student Union.

Yet still, just after the Patriots secured victory against the Seattle Seahawks with Malcolm Butler’s interception of Seahawks quarterback Russell Wilson, students began to pour onto the Southwest concourse.

But there are no reports of rampaging hordes of violent UMass students. No pictures of students burning trees, throwing bottles into the crowd or attacking police. No videos of an unruly gathering of youths to plaster across the local news.

The glowing performance of UMass students on Sunday night has nothing to do with policies instituted by the Office of Student Affairs over the past two weeks.

Widespread reports by students indicated that the “campus-wide” ban on dormitory guests was only being enforced in Southwest, which students found unfair. When asked to comment, Ed Blaguszewski, executive director of News and Media Relations, presumed that “everything (was) being enforced appropriately.”

Only about 100 students, less than 0.5 percent of UMass undergraduates, were in attendance at the Student Union watch party around 8:45 p.m., which according to Student Government Association President Vinayak Rao was “a really good event so far.” Team Positive Presence, a group of students organized by a few members of the SGA and University administration, did not facilitate any celebrations in the crowd gathered in Southwest.

But even with the seeming failure of nearly every University policy intended to limit post-Super Bowl celebration, thousands of students celebrated for over an hour without getting violent or facing police declaration of a “riot.”

What was different this time? The police did not attempt to violently engage students. At previous gatherings in 2012 and 2013, police made several arrests, fired pepper balls into the crowd and issued a dispersal order. On Sunday, the assembled police held back, allowed students to celebrate peacefully and assisted students who seemed to be in need. As the celebration began to die down, officers reportedly “fist-bumped” students leaving the concourse and told them to “stay safe.”

The officers treated the celebrating students as equals, perhaps because they too felt the glow of victory, but the reason why doesn’t matter. Students gathered in Southwest did not face lines of armored police ordering them to disperse. Instead, they saw a group of officers using megaphones to maintain public safety and ensure that violent offenders did not break the peace.

UMass alumni responded to the celebration on Twitter. Most praised the good behavior of students, but a few noted that police often instigated the violence that transformed previous gatherings into “riots.”

We have two accomplishments to celebrate. Of course, the Patriots will bring home a fourth Lombardi Trophy to New England. But far more importantly, UMass students have confounded the “ZooMass” stereotype. Like people do across the world when local sports teams win championships, students came together to laugh, shout, jump and share in collective revelry. They did so without violence, threats or illegal acts. And they did so in the name of UMass.

As I said in the Daily Hampshire Gazette last Thursday, “Students don’t want to wreck the campus; they just want to jump up and down and scream a bit.”