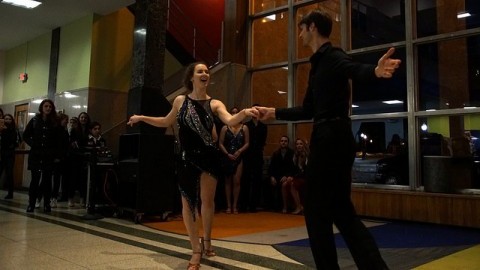 All were welcome at the Student Union Ballroom last Thursday to learn a few basic dance moves and meet new, interested people at the Ballroom Dance Club’s Valentine’s Day social. Roughly 50 people attended Thursday’s social dance, many with no dance background and only heard about the club through their friends.

“We try to have socials every other week,” said Tony Volpini, a senior environmental science and microbiology major who acts as the president of the Ballroom Dance Club. “We want to get more people interested in social dance.”

These social dances are just one activity managed by the Ballroom Dance Club, which holds practices for its roughly 100 members each week, and competes against other colleges.

“Right now, we’ve just started hosting our own competition here,” Volpini said. “We hope to expand on that.”

Volpini, who joined the club his freshman year, called his experience in the club “amazing,” and cited it as a great way to learn a practical skill while creating friendships.

Alice Metz, a junior biology major who works as the events coordinator for the club, decided to try out because of her experience in ballet. Now, she tries to stay as involved in the community as she can.

“I do as much ballroom as I can,” she said. “It’s my stress relief after classes.”

“It’s a great club and if anyone wants to try out they definitely should,” she added.

The Ballroom Dance club has developed a very dedicated group of members, including active members of the UMass alumni who were present at Thursday’s social.

Andrew Billings, a graduate who works as a lab technician on campus and was a club captain when he was a student, sought out the club when he attended, and still has a lot of attachment to the community.

Thursday’s social had plenty of people dancing for the first time alongside veterans of the club. Like many there, Joseph Greaney, a senior business management major, showed up to the social after learning about the club through word of mouth.

“A good friend of mine is part of the club, and she told me about it,” he said. “I’m meeting a lot of people, and it’s a great experience.” Greaney also said he was definitely going to continue dance activities after the social.

Lindsey Melville, also a senior business management major who is a co-captain, described the club as a way to “meet people who like the same things you do.”

Melville joined the club as a sophomore after an unhappy freshman year, and immediately felt comfortable with “(the) really welcoming community.” Now, she hopes to see ways in which the club’s status on-campus can change.

“I just want it to get bigger in our age group,” she said of ballroom dancing. “I feel like now people think it’s a dorky thing.”

Volpini also mentioned that there are misconceptions about ballroom dancing.

“It seems people don’t understand ballroom dance is a very serious thing,” he said. “If you give it the time it deserves, it takes up a lot of time.”