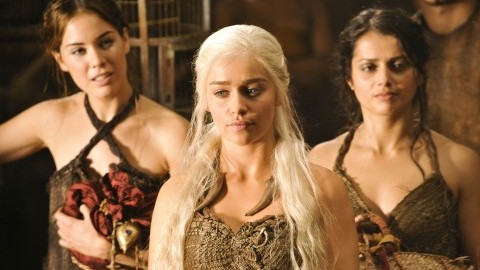 It’s a question as old as Aegon the Conqueror’s arrival in Westeros: what will finish first, “A Song of Ice and Fire” or “Game of Thrones?”

Now, four years since “A Dance With Dragons’” publication, the book series by George R.R. Martin seems destined to conclude after its progeny, the wildly successful HBO program. Producers of “Game of Thrones” David Benioff and D.B. Weiss have announced that they’ll end the show by the eighth season at the latest. As an avid fan of both “Ice and Fire” and “Thrones,” I argue that’s not a bad thing at all.

The seventh season of “Game of Thrones” faces a projected airdate in 2017. Meanwhile, “The Winds of Winter,” the next installment to “Ice and Fire,” won’t be published until at least 2016, while the most recent two books have shared a publication gap of five and a half years, with the forthcoming novel set to honor that delay. If “A Dream of Spring,” the ultimate chapter in Westeros, follows suit, Martin’s opus won’t close before 2021. There’s no feasible way for Benioff and Weiss to elongate the show to match its source material.

While unorthodox, finishing the progeny before the inspiration will pay off down the road. The longer “Game of Thrones” lingers, the farther it’ll wander from “Ice and Fire,” from its protracted excellence and from our hearts.

So far, “Game of Thrones” has diverged sparingly from “Ice and Fire,” as far as adaptations go. Techniques like conflating several minor characters into one for the show have honored the series’ spirit while cloaking it in a filmable guise. However, last year’s alterations suggest these methods are nearing their end.

Most notably, season four glimpsed the Others in the Land of Always Winter. The brief scene took us farther north than Martin ever has. Though exciting, the sequence fizzled out. The show never returned to the Others or expanded on the storyline. It was as if the show just had to remind us that those supernatural things were still doing supernatural stuff way up there.

Insertions to Martin’s canon have largely paid off – think Arya (Maisie Williams) and Tywin’s (Charles Dance) acquaintanceship in season two – but they’ll soon waterlog the show. A point will come when they’re used so Martin has time to wrap up “Ice and Fire.”

As a practitioner of literary sacrilege, I read book one after viewing season one. Although I redeemed myself by reading the subsequent books before watching the corresponding seasons, this initial experience reassures me as “Game of Thrones’” endgame takes shape.

Season one’s horrifying twist revealed book one’s biggest spoiler, but as I read Ned Stark’s last stand later on, it felt as fresh and shocking as if I’d never seen Sean Bean whisper that chilling prayer on the steps of Baelor’s Sept. Reading it after viewing it stole none of Martin’s magic.

Furthermore, the intricacies of Martin’s narratives delve further into Westeros than the program ever could. So even if Benioff and Weiss match Martin’s conclusion, the final novel will offer a fresh, more complex ending. Chances are some characters within both “The Winds of Winter” and “A Dream of Spring” won’t appear in the show, while several subplots won’t make the cut. As with the first five novels, the final two will maintain a unique feel from the show.

As far as sustenance goes, television has a dearth where bookshelves have a surplus. “Game of Thrones” can’t and shouldn’t stay on the air for a decade plus, while Martin can and should take years to perfect his opus’s denouement. Programs often lose their appeal after five or so seasons. Books can keep readers engaged for decades. No better proof exists than none other than “A Song of Ice and Fire,” first published in 1996 and never more popular than now.

All of “Game of Thrones’” contemporaries hit peaks where it now stands. “Breaking Bad” finished in a blaze of fifth season glory, “Mad Men” hit its pinnacle around its fourth and fifth years and “Dexter” collapsed after a brilliant fourth season. Even “The Wire,” widely considered the greatest television show ever produced, peaked critically in season four, its penultimate outing.

So the footrace has ended in spirit. I’ll admit, it was a tough pill to swallow, but both the show and the novels will benefit from this decision. The show can end on top, and Martin gains take ample time to perfect “A Song of Ice and Fire’s” conclusion. Moreover, whether you watch it before you read, or play the scholar and read it first, Westeros never fails to enthrall.