The men behind the Mullins Militia: How UMass’ student fan group got its start 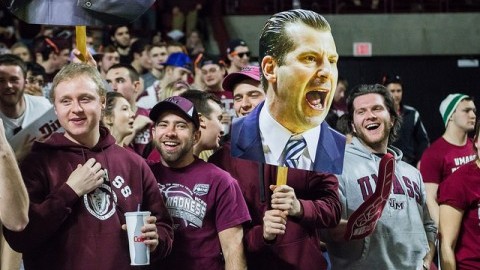 As students poured into the Mullins Center last Thursday night for the game between the Massachusetts men’s basketball team and Dayton, they were handed a white rally towel courtesy of UMass Dining. As students got to their seats, they received another souvenir.

A colorful piece of paper labeled “Bunker Banter” was on every seat, along with newspapers in the front rows to distract the opposition. The “Bunker Banter,” which was full of dirt on the opposing players as well as updates on the UMass basketball team, was courtesy of the Mullins Militia.

The Mullins Militia, an independent student group, takes residence behind the left baseline and right next to the opposing team’s bench. The men in charge? Seniors PJ Stevens and Zach Zaremba.

Stevens, from Groton and Zaremba, from Corvallis, Oregon have both been involved in the Mullins Militia since they were freshmen.

“We’re both pretty big basketball fans,” Zaremba said. “I think college basketball is the best atmosphere in all of sports.”

Stevens and Zaremba haven’t always been in charge of the Mullins Militia but they credit their new leadership to their dedication as fans throughout their time at UMass.

“The reason it got passed down to us was because we were at every game as freshman, sophomores and juniors,” Zaremba said. “The biggest meetings we have are the games. That’s where you learn who really wants to be a part of it.”

“We’ve been working with associate athletic director Tim Kenney and director of sales and marketing Jason Blanchette,” Stevens said. “They have been a big help to us, we meet with them a bunch before the season.”

“We’re both sport management majors,” Zaremba said. “We talk about marketing and getting our attendance up. We don’t have giveaways and we don’t have a budget. Attendance comes down to winning.”

“When you compare (attendance) to our freshman year it’s off the charts,” Stevens said. “We’re an exciting team to watch.”

Up by three points with 13 minutes remaining last Thursday, UMass basketball showed off just how exciting it can truly be. A Maxie Esho alley-oop dunk followed by a Tyler Bergantino dunk got the Mullins Center rocking and gave the Minutemen a lead they would not relinquish.

The rowdiness of the Militia was in full display after that sequence of events.

“We love chants,” Zaremba said. “We hope people read (the Bunker Banter) and use it for the chants.”

On the left side of the “Bunker Banter” is a “meet Dayton’s players” section that features each opposing player, their position, height, points per game and some commentary.

Under Flyers guard Darrell Davis’ info is: “Nickname is ‘Baby D’…interesting. Majoring in ‘Discover Arts’ along with (Kendall) Pollard, (Scoochie) Smith and (Kyle) Davis – who knows what they’ll discover!”

“We always sit far left by the opponents’ bench,” Zaremba said. “We love yelling at the opposing bench. Sometimes we’ll hear someone else yell something that was on the ‘Bunker Banter’ and that’s when I feel we’ve done our job.”

“We like chants but being able to personalize your chants for the other team is the best part of being a fan,” Zaremba said. “You get in their heads.”

The Mullins Militia is not recognized as an official Registered Student Organization on campus, which means it cannot receive funding from the University. However, UMass athletics supports them and that is what validates the group in the eyes of Stevens and Zaremba.

“(UMass) athletics lets us print the sheets for free,” Stevens said. “They help us with busses. We got a bus to TD Garden the last two years. They’re definitely willing to help us, they scratch our backs and we scratch theirs.”

The Mullins Militia only generates revenue through t-shirt sales. T-shirts can be found on their website, mullinsmilitia.com, and by “enlisting in the militia” you can fill out a form and receive an official Mullins Militia shirt.

The history of the Mullins Militia goes back five years. UMass basketball coach Derek Kellogg supported fan involvement and getting students involved. Originally, he found a group of 10 or 11 passionate freshmen and before games they would go into the locker room, listen to him give pump up speeches and the students could greet the players as they came out onto the court.

“This was before we had fans,” Zaremba said. “The idea was to get a student body like the Cameron Crazies (at Duke) to get students involved. The following year the team got better and that was when we came in as freshmen.”

The appeal of joining the Mullins Militia goes beyond cheering for your school. You get a shirt, you get to go to games early and you get to sit in the front row.

“I would say that the team’s pretty darn fun,” Zaremba said. “(The) record doesn’t look great but the reality is they have played an incredibly tough schedule. The way we play is we get a lot of players dunking. They like to feed off that stuff and the fan energy.”

“I think fans are looking for an experience, “Stevens said. “The best way to do that is for everyone to show up and do the same thing. To have 3,000 kids in there cheering fuels the team on.”

While the Mullins Militia has grown exponentially compared to five years ago, the group is not, and should not, be satisfied.

“The key thing is that kids have to want to be a part of something,” Stevens said. “It takes everyone’s time and effort to choreograph chants and interplay between the crowd and the band. If everyone’s not on the same page then it doesn’t work, but we’d love to develop new traditions and it seems like the student interest is picking up. As the students get more involved, we’ll be able to do more stuff.”

When asked who will be taking over the Militia when they graduate, Stevens and Zaremba didn’t have an answer. As of now, there are five home games left this year for UMass, the next being Feb. 8 against La Salle.

Stevens and Zaremba were part of building and growing the student section in the hopes of it continuing for years to come, and did it just by heading down to the Mullins Center.
Who will be next?

Griffin Carroll can be reached at [email protected]