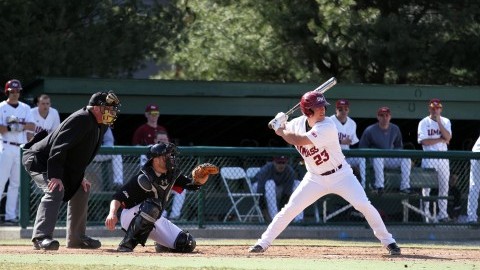 Earl Lorden Field is covered in snow. The harsh winter of 2014-15 has no end in sight. But in the dark confines of Boyden Gymnasium, ground balls are being taken on the hardwood floor and pitchers are throwing simulated at bats in cages.

For the Massachusetts baseball team, the season is right around the corner. The same snow that’s caused weekly school cancellations has made it tough for UMass to get outside and prepare for the season, but head coach Mike Stone likes where his team is right now.

“I have liked our preparation so far this year,” Stone said. “The guys have worked really hard, and they are committed this year more than others.”

After coming off a disappointing 15-31 record in 2014, the Minutemen look to rebound with a roster that is a year older and more experienced. UMass returns with some of its top players from last year while getting back some of its injured stars like Rob McLam.

The veteran leadership along with the presence of youth is a good combination for a team hungry for a winning season.

“I think we can rebound because of our attitude and work ethic,” Stone said. “The guys are more dedicated this year and the quality of people we have this year is excellent.”

The Minutemen lost two of their top three hitters from last year – Dylan Begin and Nik Campero – but retains its top hitter from 2013, Rob McLam. McLam led the team with a .311 average and 11 doubles. Stone has high praise and hopes for McLam this season, saying he is more confident and better than he was in 2013.

“At the plate he is a fearless hitter,” Stone said. “Having a guy back like Rob will hopefully mean a lot, it is a positive thing.”

Getting McLam back in the middle of the lineup will be a huge help for the Minutemen, who also get last year’s top hitter back – Mike Geannelis. The sophomore hit .347 in 29 games in his first season at UMass, and Stone expects even bigger things out of Geannelis this time around.

“He is better than he was last year,” Stone said. “He is more confident and experienced and now he will be in the lineup everyday and have a big role on the mound.”

In 2014, the Minutemen batted .257 as a team and combined for only 13 home runs. But with players like Geannelis a year older and a dynamic piece in McLam returning to the team, UMass’s offensive numbers should be better.

Stone is expecting more out of his team this season offensively.

“A lot of guys look good,” Stone said. “The returning seniors have to perform better than they have in the past.”

Senior Adam Picard will be a big part of the lineup, and Geannelis, John Jennings and Brandon Walsh will all play roles in the middle of the order as well, according to Stone.

With the offense expected to get a big boost this year, the pitching staff will need to do its part in order to ensure a winning season for UMass. Senior captains Conor LeBlanc and Andrew Grant will lead the rotation, and players like Geannelis and Walsh – who also pitches when he doesn’t have catching duties – will be counted on in supporting roles.

Stone had high praise for the dual-threat Walsh.

“He is a tough kid who has worked very hard,” Stone said. “He is a worker, competitor and wants to do well.”

The Minutemen are currently scheduled for a single game against Central Connecticut to open the season on March 3, but soon after will travel to Kentucky for a four game series with the Wildcats. With snow still falling in Amherst, UMass looks forward to escaping down south to warm weather and starting the season on the right foot.