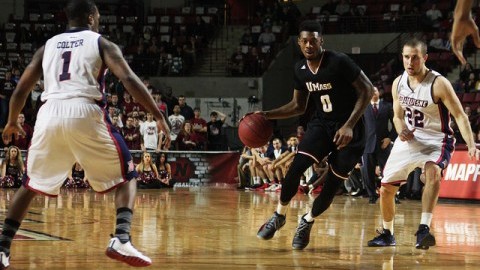 At this point, there aren’t many secrets between the Massachusetts men’s basketball team and Rhode Island, which square off Wednesday night at the Ryan Center.

The meeting will be the fifth between the two teams in a little more than a year and comes as both teams are tied for first place in the Atlantic 10.

If matchups between the Minutemen and Rams followed the same type of formula, it’d look like this: Strong defensive showings coupled with crucial individual performances in crunch time, multiplied by a penchant for down-to-the-wire finishes.

Recently, the formula continues to compute to one constant: A UMass victory.

“It’s just one of those games where it’s a tough battle of a game,” Minutemen center Cady Lalanne said. “They try to grind you out until the end to see who is going to win and usually pull through that.”

UMass (16-9, 9-3 A-10) has won seven straight games against URI, with its last loss coming in the 2011-12 season. Nearly every game, especially the last four – all decided by single digits – have been tightly contested affairs, with the best representation coming earlier this year.

The Minutemen downed the Rams (17-6, 9-3 A-10) 60-56 at home on Jan. 17. Unlike last season, when UMass was the clear favorite in all three wins over URI, the momentum was expected to swing more toward the Rams, who continue to improve.

URI led by as many as six points with six minutes remaining, but the Minutemen closed on a 13-3 run, received an unlikely scoring outburst from reserve forward Zach Coleman and escaped victorious.

According to Lalanne, this isn’t something either team will forget about on Wednesday.

When the two teams take to the Ryan Center floor in Kingston, Rhode Island, Wednesday, it’ll come as the stakes are as high as they’ve ever been.

“I think everybody understands it’s a big game,” UMass coach Derek Kellogg said.           “We’ve played these guys tough all the time and they’re playing as good as they’ve played since I’ve been here. And I think we’re playing better.

“This will be a good, hard-fought game with a crowd that’ll be really into it.”

The Minutemen will contend with a Rams team that has secondary pieces emerging around star guard E.C. Matthews, who is averaging 16.3 points per game.

URI forward Hassan Martin is averaging 3.1 blocks per game – he’s also averaging 12 points and 7.6 rebounds per contest – and freshman guard Jared Terrell is averaging 11 points per game since the loss to UMass a month ago.

Kellogg noted before his team’s practice Tuesday that both Martin and Terrell could be deemed as “X-factors.”

“I think (Hassan Martin) and Terrell have really stepped their games up,” Kellogg said. “I think our game vs. them helped Terrell’s confidence. Especially early, he made some big plays and he’s built on that.”

URI isn’t a team that typically wilts at home, either.

“We’ve played well on the road, but this is two teams that are tied for first,” Kellogg said. “Playing tougher teams on the road is a challenge. Rhode Island’s record at home in conference play is 5-1, so they obviously play well.”

The Minutemen are expecting a stiff challenge, but Lalanne stopped short of calling it a rivalry game. At least from UMass’ perspective, that is.

The Minutemen take a six-game winning streak into Rhode Island Wednesday. For those who are superstitious, you may have noticed the team continues to wear its alternate black uniforms.

But the reasoning behind that extends far deeper than a winning streak. Instead, according to Lalanne, it’s to pay tribute to Black History Month.

“We thought it would be something nice to do to wear black uniforms to wear throughout February,” he said. “And so far, since we’ve been wearing them we’ve been winning.”

Lalanne said the idea was originally his.

“I had thought about it and I asked some guys on the team and they all agreed with it. So I went with it.”

UMass and Rhode Island will tip-off at 7 p.m Wednesday.