UMass basketball’s Cady Lalanne: ‘Why not us?’ 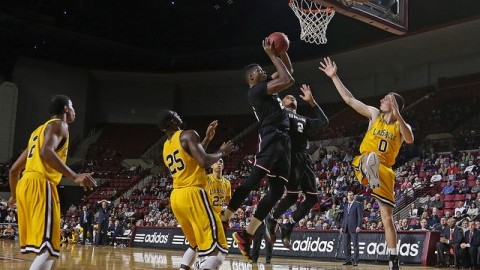 The Massachusetts men’s basketball team enters the most important week of its season, as both the hierarchy of the Atlantic 10 Conference and postseason aspirations are directly at stake.

But on Monday, it was business as usual inside the Mullins Center.

“I’m happy we’re in this position,” said UMass coach Derek Kellogg, who noted that despite the heightened circumstances, he didn’t anticipate much chance of a change in attitude or effort.

“Honestly, to go against two of the top teams in the league with a chance to have it mean something, it’ll be interesting to see how our team responds,” Kellogg said.

The Minutemen (16-9, 9-3 Atlantic 10) sit atop the conference, tied with Dayton, Rhode Island and Virginia Commonwealth for first place. The logjam figures to work itself out after this week, as UMass faces URI Wednesday and VCU Saturday.

Both games are road dates for a Minutemen team riding a six-game winning streak. But according to members of the Minutemen, there’s no added pressure as the week unfolds.

“I don’t think it’s pressure,” Lalanne said. “We’re trying to win those games. So it’s like a sense of urgency for us to win the games.”

“No, we’ve just got to go out there and play hard,” UMass guard Jabarie Hinds said. “I don’t feel any pressure. It’s another day to play basketball, just a bigger game.”

Kellogg, who has long acted as the voice of reason this season both when UMass has played well and when there were periods of doubt, put the upcoming week into perspective.

“I think there’s pressure for every game from here on out,” Kellogg said. “If we play well, we’ve got a chance to put ourselves in position for a good seed in the (Atlantic 10) tournament in Brooklyn.”

About a month ago, it’d be difficult to imagine a UMass team jockeying for the alpha position within the Atlantic 10 and even flirting with the NCAA tournament discussion.

On Jan. 3, UMass lost to St. Bonaventure at home to open its conference schedule. It was their third loss in four games, dropping the Minutemen to 7-7 and painting the picture of a team in desperate need of tightening loose screws.

It was a far cry from the team that many fans – and even some players – believed would follow up last year’s NCAA tournament appearance with another bid.

But Kellogg cautioned from the beginning that this team would be different. It needed time to gel, season and even needed certain players to buy into their roles. He noted in October that unlike last year, this year’s team would need to piece things together as it went along.

Only now is it coming all together. As Kellogg said, the team stayed the course.

“They’ve bought in,” he said. “We’ve had some ups and downs and I think we’ve persevered. That helps make you a stronger, better team down the line.”

“The coaches have been telling me since summer time that this team was going to start getting better around this time of the year in conference play,” Lalanne said. “Those ups and downs were a little frustrating, but it reminded me to stay with it and the team started pulling through.”

UMass even used it as a rallying point.

There’s no masking the importance of both the URI and VCU games. Kellogg believes “everybody” understands Wednesday’s game with Rhode Island is important and Lalanne said UMass hasn’t been in a position to win the regular season title since 2007.

Furthermore, another win over URI (UMass beat the Rams at home last month) and a win over No. 25 VCU firmly plants the Minutemen in the national conversation as a team on the rise, which is perfect timing as March rolls around. Talk about a change from where UMass was in January.

Now, the Minutemen have the opportunity to complete the turnaround.