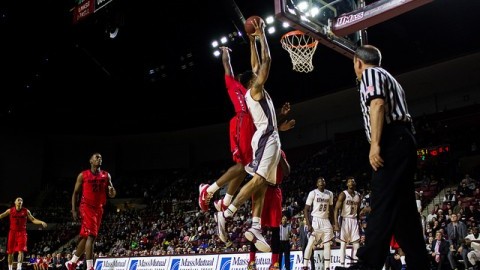 On paper, Wednesday’s matchup against Fordham should be a fairly easy one for the Massachusetts men’s basketball team.

The Rams (5-14, 0-8 Atlantic 10) are winless in their eight games in Atlantic 10 play. However, before the Minutemen look too far ahead of themselves, head coach Derek Kellogg was quick to put a halt on any visions that their third consecutive will be an easy one.

“They’re as talented offensively as any of the teams we’ve faced,” Kellogg said. “I’m not sure (in conference play) there really is ‘playing down,’ because I don’t think there is that much difference between the last place team and the fourth or fifth best team. Especially when you go on the road.”

Leading the charge for the Rams is freshman standout Eric Paschall, averaging 17.1 pointer per game this season, and 18.8 ppg in conference play. In addition to scoring the basketball, the 6-foot-6, 205-pound guard is third on the team with 5.5 rebounds per game.

Kellogg heaped heavy praise when talking about Paschall, and put him on the same level as Rhode Island’s E.C. Matthews and Saint Joseph’s DeAndre Bembry in terms of ability to make an impact play within the conference as a first-year player.

“He came in with high accolades and everyone knew how good he was and he’s lived up to his billing,” Kellogg said.

As he’s done so every game this season, UMass guard Derrick Gordon will once again be called up to lock down the opposition’s top player, something he isn’t afraid of.

“I’m going to be guarding him. I’m just looking to get him out of his game,” Gordon said. “He’s a freshman, I’m a junior. I’ve just go to go out there and do what I do and everything else is going to follow.”

Although Gordon’s confidence may be sky high, he’s been dealing with Achilles tendonitis that has lingered all season. He aggravated the injury again Monday at practice, and because of that didn’t go full speed at practice on Tuesday. Kellogg said that he was trying to keep Gordon as close to 100 percent as possible for Wednesday.

“I’ve just got to rest up and get ready for the game because I’ve got a big assignment tomorrow as far as guarding one of the best players on their team,” Gordon said.

In addition to Paschall’s offense, Mandell Thomas adds 12.4 points per game, while Chris Sengfelder also averages double-digits in scoring, with 10.4 points per game. Ryan Rhoomes controls the paint for Fordham and averages 8.8 rebounds per game.

The Rams have yet to win a game this calendar year – their last win was on Dec. 31 over South Carolina State . However, center Cady Lalanne knows just how important this game is for the Minutemen, especially if they hope to make a serious run toward postseason play.

Lalanne has 996 career points and is four away from becoming the 47th player in UMass history to score 1,000 points.

Tip-off from Rose Hill Gymnasium will be at 7 p.m. and the game can be viewed on the SNY network.