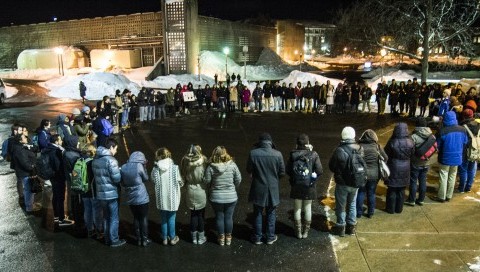 All three victims – a newlywed couple, Deah Barakat, 23, Yusor Abu-Salha, 21 and the bride’s younger sister Razan Abu-Salha, 19 – were students of UNC. This was a senseless and terrible act, commented Said Elkatta, a member of the Muslim Student Association, to the crowd of about 100 students gathered in a circle.

“We’re all human beings. We have common values,” Elkatta added.

He urged people to strip away religious prejudice and to connect on the common grounds of humanity. Students were invited to speak freely to the rest of the crowd from their hearts and to come together in unity during a time of difficulty and confusion.

The tragedy hits the campus hard in the wake of last semester’s race-driven crimes and the protests that followed.

“As a black Muslim it’s a double whammy,” said Bahiya Nasuuna, a sophomore and member of the MSA. “But we should be outraged and come together, instead of dividing ourselves even more.”

Candles were provided and the students paused for an emotional moment of silence. They were asked to pray for the families and friends of the victims.

“What’s important now is to figure out what we do next. What we cannot afford is silence,” said Hassaan Khan, a Ph.D. candidate in environmental engineering. “We’ve been silent for way too long.”
He went on to say that when atrocities are committed against people who are outside of their immediate sphere of influence, the ordinary citizen does nothing.

“But it’s time to stand up,” Khan said. “Say something ¬– history will judge us in 50 years from now, and we will be indicted for our inaction.”

Hate is created, he continued, it is not our natural tendency. People in the media who speak hatred have to share the responsibility of this crime. But unless we as a society speak up and stop making generalized and incorrect claims about whole groups of people, this mistake will continue within all of us – not just the occasional hate-monger that we see on TV.

In addition to learning about the victims and the incident in North Carolina, people should learn about Islam, said Elkhansaa Elguenaoui, also a member of the MSA. “Learn about what we really stand for – at the end of the day, we all share the same similarities.”

For more information, students are encouraged to contact the Muslim Students Association, located inside of the Student Union.

Andy Castillo can be reached at [email protected]