UMass heads to Cambridge looking to right the ship against Harvard 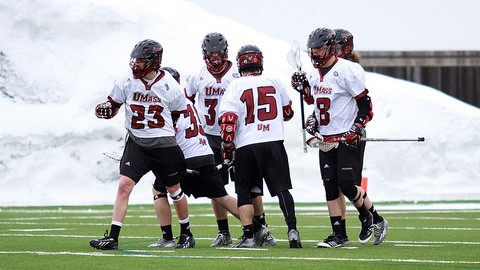 The Massachusetts men’s lacrosse team travels to Harvard this Saturday hoping to avoid a situation it hasn’t been in since 1955—an 0-3 start to the season.

After falling to No. 20 Army and No. 5 North Carolina in its first two matchups, UMass (0-2) battles the No. 13 Crimson in their season opener.

Harvard is propelled by a stingy defense that limited 11 of its 17 opponents last season to under 10 goals. Led by preseason All-NEILA selections Bobby Duvnjack, Brian Fischer and Stephen Jahelka, Cannella said that the Crimson’s defensive corpse may prove troublesome against a UMass attack that lacked depth in its first two games.

“We don’t have a lot of depth, that’s one of the issues with us right now,” Cannella said. “You don’t really have the competition that you need day in and day out where people really have to push themselves in order to keep their jobs.”

UMass was held to just seven and eight goals respectively in its first two games of the season.

Leading the Minutemen’s limited offense has been sophomore Nick Mariano and freshmen Buddy Carr and Peter Lindley. The trio has combined for 16-of-25 Minutemen goals through two games. Cannella said he expects these contributors to continue their production Saturday.

“Some guys have done a nice job and they’ve kind of been fearless,” Cannella said. “They’ve gone out there and just do what they do and have been consistent.”

On defense, UMass is coming off a performance in which it conceded 20 goals to a prolific Tar Heels’ offense. However, junior goalie Zach Oliveri said that the defensive unit has refocused heading into the weekend.

“I think we have to tighten a couple things up but I think the defense is ready to go,” Oliveri said. “I can see the look in their eyes that they’re focused.”

Oliveri faced 40 total shots last Saturday at North Carolina, saving nine of them in the loss.

“I’ve got to do my job in making saves but at the end of the day, we’ve got to execute as a whole group,” Oliveri said.

According to Cannella, one point of attention for the Minutemen’s defense this weekend will be junior Devin Dwyer, who led the Crimson with 47 points last season. Cannella praised Dwyer’s ability to set up his teammates on the attacking end.

Cannella said that the goal will be to stay in front of Dwyer and “stay on his hands” in an attempt to slow down the attackman and Harvard’s offense.

With the possibility of an 0-3 start resting in Saturday’s result, Oliveri said that the general team mindset is still optimistic as UMass prepares for the two-hour bus ride to Cambridge.

“You have to stay positive,” Oliveri said. “We might have to crank up the notches a little bit in intensity and focus but you can’t change how you prepare everyday individually and as a team. You just have to really stay the course, as Coach keeps saying, and be positive.”

Cannella added that the tough start has further motivated the Minutemen in its approach for the rest of their difficult schedule.

“I think everybody’s a little sore, a little pissed off about the way we’ve started,” Cannella said. “We’ve played two great teams, but we’re giving no excuses. We’re not asking for excuses. They’ve hung together and hopefully we can have a positive outcome on Saturday.”