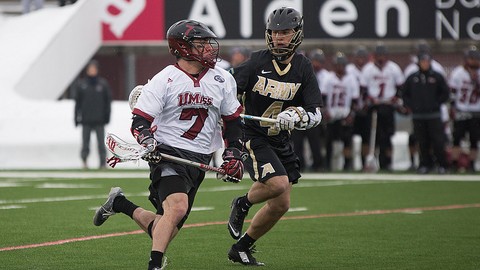 While last season opened on a seven-game winning streak, the Massachusetts men’s lacrosse team struggled coming out of the gates this year, falling 12-7 to No. 20 Army.

The Minutemen (0-1) never led Saturday’s matinee affair, as the Black Knights (1-0) established control 57 seconds into the game with an unassisted goal from Gunnar Miller. The score soon ballooned to a 5-0 Army advantage heading into the second quarter.

“They just came out on fire from the start,” UMass co-captain Ryan Izzo said. “We needed to match their intensity and we obviously didn’t do that. That first quarter was kind of a hit for us.”

Coming out of the halftime break trailing 7-3, UMass was then dominated in the third frame, giving up four more goals without a response. While the Minutemen responded with a four-goal performance over the final 15 minutes of regulation, coach Greg Cannella said that the surge came too late.

“I’d like to see us react a little better, to bounce back a bit to give us a chance,” Cannella said. “But Army deserves all the credit in the world, they beat us.”

While the Black Knights boast one of the best defensive units in the nation, Cannella said that the Minutemen struggled to maintain possession in large part due to unforced errors and turnovers.

“I don’t think we handled the ball very well, we threw it away a few times,” he said. “I thought we held the ball too long in a few cases as well in the corners.”

As a result, UMass suffered its fifth straight loss dating back to last season’s second half struggles. During this period, the Minutemen haven’t reached double figures in scoring.

“Army has a great defense and we just didn’t have the ball as much as wanted to,” sophomore Nick Mariano said. “And when we did, we didn’t make the right looks all the time. We’ve just got to go back to the drawing board and just get ready for the upcoming week.”

Mariano, who led UMass with 29 goals last year, finished Saturday’s loss with three goals and one assist. Despite the four points, Cannella said that Mariano and the Minutemen’s other young attackers must show improvement.

Mariano was one of three sophomores alongside Grant Consoletti and Brendan Hegarty to start on attack in the season opener. Consoletti and Hegarty combined for just two shots and no points.

“If you don’t get production from those young guys, especially on attack, you’re going to struggle,” Cannella said. “There’s guys out there who’s played for us last year and we need them to elevate their game a bit more.”

Peter Lindley represented one bright spot for UMass on Saturday. Playing in his first collegiate game, the freshman from Darien, Connecticut finished with two fourth-quarter goals in limited action.

Cole Johnson led the way for the Black Knights with four goals in the first half. John Glesener added two goals and two assists in the winning effort.

The nonconference schedule doesn’t get any easier for UMass, which will next travel to Chapel Hill, North Carolina to battle No. 5 North Carolina on Feb. 14. According to Izzo, Saturday’s loss just “adds fuel to the fire” in preparation for the Tar Heels.

“It’s kind of good that it happened this early,” Izzo said. “First game, it hurts obviously, but all we can do is move on.”