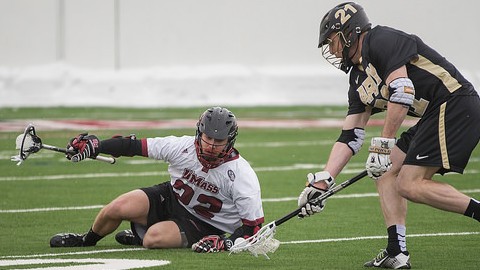 The Massachusetts men’s lacrosse team opened up the season on Saturday afternoon against No. 20 Army, but fell short offensively in a frustrating 12-7 loss.

Leading up to the game, UMass coach Greg Cannella stressed that that his young offense needed to make the most of its opportunities against a strong Army defense that was not just physical, but well-coached and very talented.

On the day though, the Minutemen failed to create chances and were outshot, 32-17, with Army dominating from the get-go. The swarming Black Knight defense bottled up the few attacks the Minutemen mustered, while the Army offense ran rampant and scored five goals to start the game. From that point on, the Minutemen played catch-up, but even then, the team never truly found its stride.

“We failed to keep up with them and never really matched their energy levels, but they have a great defense, which made it really difficult for our midfield to create chances and for offense to score goals. All we can do now is to get back to the drawing board and work out what we did wrong,” he said.

One of the bright spots of the day, however, came from sophomore Minutemen forward Nick Mariano, who picked up where he left off last season (29 goals) and led the team with three goals and one assist. Despite his three goals, Mariano felt the team didn’t do enough offensively to get the job done.

“The offense just didn’t have the ball enough and everyone got a little frustrated, myself included, but we have to do a better job of taking the chances were given when we do have it,” he said. “It’s also important to realize that Army had a great defense and they made it really difficult for us to score when we were in possession.”

Cannella attributed the lack of offensive production to a number of variables.

“In our sport you’re not going to win many games if you don’t win face-offs, or take care of the ball in possession,” he said.

“Today we gave the ball away much too easily and never really threatened enough when we went forward. When we did create chances we didn’t get enough shots on goal, and if you only shoot (17) times, you can’t possibly win a game. But you also have to credit Army too, they are a great team with talented players, a solid coaching staff, and a great defense that effectively took us out of the game,” Canella said.

Moving forward, the Minutemen will look to focus on themselves.

“I think that the best thing to do at this point is to keep working and hard and not point fingers,” Cannella said. “This week we are going to look long and hard at what we need to do to fix ourselves, and then we’ll focus on our opponents, but it has to start with ourselves.”

The Minutemen will return to action next Saturday at 12 p.m. when they travel to face No.5 North Carolina.