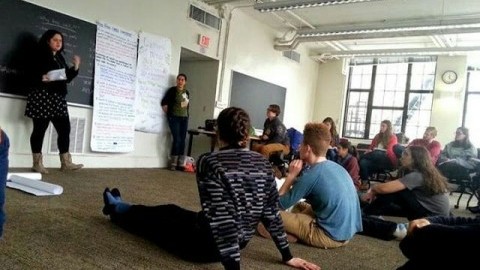 Five students from the University of Massachusetts joined a nationwide group of students at Bard College in Dutchess County, New York to participate in the Real Food Challenge retreat over Presidents’ Day weekend.

Here, they worked on strategizing, community building and organizing in order to strengthen the University’s Real Food Challenge campaign, which promotes a “healthy, fair and green food system,” according to its website.

Out of the 16 universities in attendance, UMass was the only school that had an official campaign commitment. The students focused specifically on networking and brainstorming ideas for putting the University’s Real Food Challenge campaign commitment into action.

The Real Food Challenge began as a nationwide campaign for students to reform the current food systems existing at their universities. It defines real food as “food which truly nourishes producers, consumers, communities and the earth. It is a food system –from seed to plate – that fundamentally respects human dignity and health, animal welfare, social justice and environmental sustainability.”

According to its website, schools can meet the challenge’s goal by shifting $1 billion of existing university food budgets away from industrial farms and toward local and community based, fair trade, ecologically sound and humane food sources by 2020.

“Attending this retreat opened my eyes to the fact that student communities hold the political power necessary to transform higher education while dismantling food system inequities,” Biller said. “Food can be a strategic vehicle for students to address the racist, classist and gendered hierarchies built into our schools and dining services.”

According to Biller, students at the conference studied the methods employed by other famous activist groups to influence how they would strengthen their campus’ campaigns.

“For inspiration, we can look to institutional divestment from South Africa to end apartheid, the Student Nonviolent Coordinating Committee (SNCC) during the civil rights movement and the contemporary Student Farmworker Alliance that pushes for improved wages as well as conditions for the Coalition of Immokalee Workers in Florida,” Biller said.

“Having the commitment signed, we are not only working with creating shifts within the system and bringing new products into the dining halls, but are working on education and awareness, as well as student involvement,” said Patricia Murphy, a UMass sophomore who is currently active in the Real Food Campaign.

One of the easiest ways to get involved as a student, according to Murphy, is to join the student group, which holds weekly meetings in the Student Union room 423a on Thursdays from 6:30 to 7:30 p.m.

Another way is to apply to become a member of the Food System’s Working Group, which works directly with Auxiliary services in order to create food policies and plans on campus, as well as outreach to local farmers.

Brooke Parziale can be reached at [email protected]