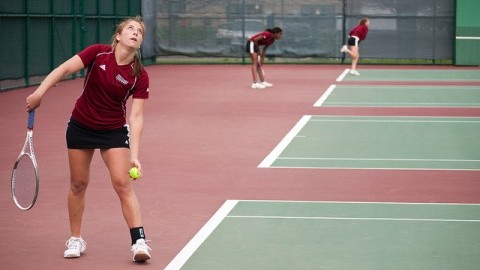 The Massachusetts women’s tennis team is ranked fourth in the Atlantic 10 Conference preseason poll, one above where the Minutewomen ended last season after a semifinal loss to VCU. So it speaks volumes about coach Judy Dixon’s confidence in her team when, earlier this week, she described the ranking as “upsetting”, saying that the ranking was “not indicative of history, more like reputation.”

The source of her disappointment in the polls is crystal clear considering how well UMass finished last season and how they have carried that performance over to the fall. Last spring, UMass won eight of its last nine matches, including a quarterfinal victory over Richmond – ranked second in the preseason poll.

Supporters of the rankings will point out the Minutewomen lost nearly half of their roster from last season and filling in the voids left by seniors Jessica Podlofsky and Yuliana Motyl is going to be a difficult task.

Difficult, but not impossible.

Fall tournament season, despite the name, is really a tune-up period for most collegiate tennis programs to develop players, adjust lineups and test the waters to get a sense of who the teams to beat are. The Minutewomen, thanks to an exceptionally strong class of transfers and freshmen, charged through the fall, posting records of 51-34 and 27-14 in singles and doubles, respectively. After competing against high-quality teams from around the nation, UMass looks as poised as ever to make big waves in the conference tournament in April.

Headlining the squad’s impressive start has been freshman phenom Ana Yrazusta Acosta. While Acosta’s arrival at UMass may have flown completely under the radar, her recent play has caught the attention of Dixon and she skyrocketed to the top of the Minutewomen lineup.

“I think I’m extremely aware that we have a hot commodity,” Dixon said in reference to her new young star. “She’s young, she’s extremely talented, but she’s raw…She has the ability to play with anybody and I mean anybody.”

Acosta finished 7-4 in singles play despite consistently facing the top player on opposing teams. In doubles, she has paired up with another impressive newcomer, Carol Benito, a transfer from the University of Tulsa. The two have solidified a spot as the No. 1 doubles pairing on the squad, and posted a 9-3 record over the fall.

While tennis is predominantly seen as an individual sport, any coach at the college level will cite team unity and cohesion are critical to success in both doubles and singles. Once again, with the introduction of so many new faces, concern for how well a team with just four upperclassmen would come together off the court was well warranted. And yet, the Minutewomen have an answer once again in the form of senior Chanel Glasper.

“I can’t say enough about her” Dixon said of her solo team captain, “She’s created such a positive team environment. She’s done such a job that the team has taken on her personality which is feisty, hard-working…This is one of the more quality teams that we’ve ever had and certainly one of the easiest teams to work with.”

Glasper has been a keystone of this UMass team for years now and is eying the career singles record that Podlofsky broke last spring. She trails the alumnus by eight victories.

In their first match of the season, the Minutewomen were shut out by Brown, 7-0. However, Dixon emphasized that it was their first spring match compared to Brown’s third, and her team needs some time to shake off some rust – or maybe snow – before they start playing up to their true potential.

Regardless of the stumble out of the gate, the tennis program, with an abundance of young talent, looks to be on the doorstep of a compelling new era.